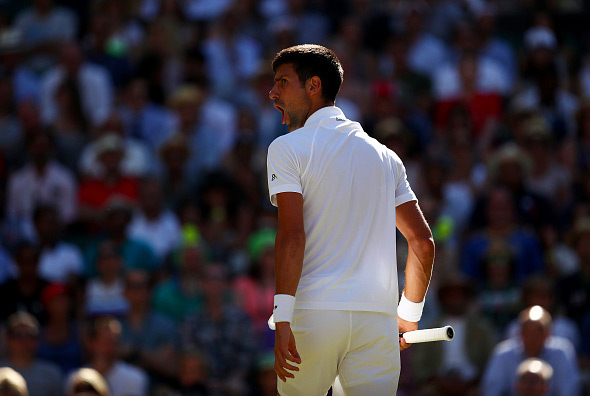 After a one-sided opener, it looked like the Frenchman might level the match when he led 4-2 in the second set tie-break, only for the no.2 seed to raise his game just in time.

Nole broke early in the third set and wrapped up the victory on his third match point after two hours and 13 minutes of play.

The Serbian star won 71% of points on his first serve and was 18/23 on net approaches. He capitalised on four of his 10 break point opportunities and saved one of two break points he faced.

“I’m glad we were scheduled to play on Centre Court which meant we were able to finish the match. I’m glad it’s all done and I’m looking forward to the next one” the world no.4 said. “I’ve not dropped a set yet on grass courts events, here and in Eastbourne, I’m motivated to get as far as I can. Hopefully I will be able to maintain this rhythm.”

Novak will look to move a step closer to a fourth Wimbledon title when he takes on no.11 seed Tomas Berdych on Wednesday for a place in the semi-finals.

Djokovic leads the ATP H2H series against the Czech 25-2. Berdych won their 2010 Wimbledon semis, but the Belgrade native clinched their 2013 quarter-final encounter.