Serbia is through to the Davis Cup by BNP Paribas World Group semi-finals for the third time in four years!

World no.1 Novak Djokovic beat top-ranked American Sam Querrey 7-5, 6-7 (4), 6-1, 6-0 in two hours and 35 minutes to give the 2010 champions an unassailable 3-1 lead over USA in their quarterfinal contest at Boise State University’s Taco Bell Arena.

Novak twisted his ankle early in the match, but continued to battle feeling responsible to keep playing for his country in the sport’s only team competition.

Novak stepped up to the champion level and cruised through the third and fourth sets to clinch tie for his team.

“I’m very happy I managed to play the whole match and that I played really well in the third and fourth sets,’ said Novak. “It’s very strong emotion when you play for your country. I guess that’s the biggest reason why I kept playing. It meant a lot to me personally and the whole team and the nation, we are glad to be in semis again.” 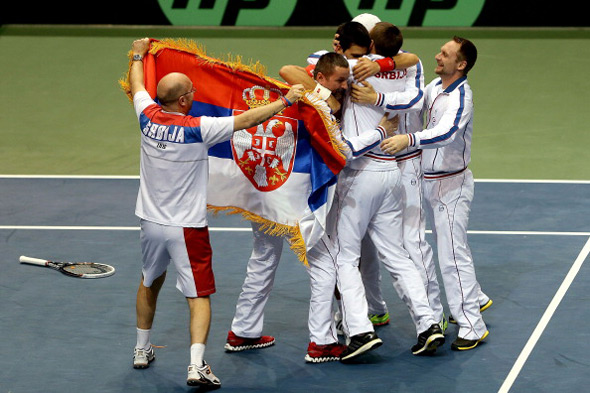 The fifth match between John Isner and Viktor Troicki was not played.