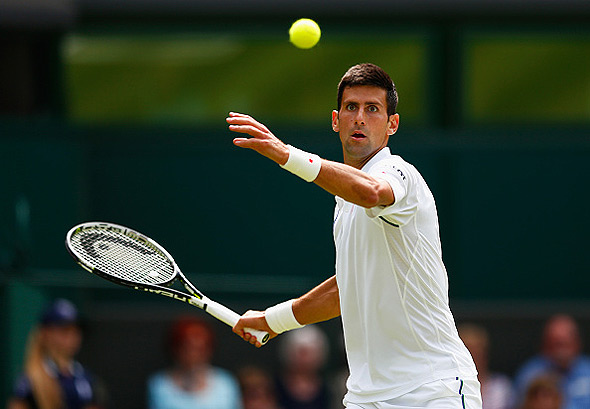 Top seed Novak Djokovic needed one hour and 31 minutes to see off Jarrko Nieminen of Finland in straight sets in 34C heat on Wednesday afternoon.

The world no.1 was down a break early on but rarely faced much trouble from that point onwards. He played some high-quality tennis, breaking five times from 14 opportunities and winning 26 of 30 points when approaching the net (87%).

The victory marks the seventh time that Nole and Nieminen met on the professional tour, with the 28-year-old Belgrade native holding a dominant 6-1 record.

“It’s Nieminen’s last Wimbledon so I congratulated him on a great career,” Djokovic said. “I think I did well through the three sets. I managed to regroup, play some good tennis and get control… On this warm day it’s good to spend less time on the court. I’m glad with the way I’m playing and getting into form. Hopefully I’ll be able to elevate the level of my performances as the tournament progresses.”

Novak next plays no.27 seed Bernard Tomic on Friday. The defending champion has a perfect 3-0 H2H record against the Australian hope. They last met in 2012.