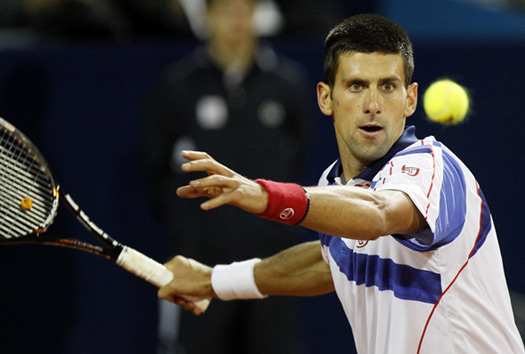 World no.2 Novak Djokovic raced past Slovenian Blaz Kavcic in straight sets 6-3, 6-2 in 85 minutes to book his place in the Serbia Open semi-final.

Novak broke his opponent’s serve in the fourth game of the first set and it was enough for him to take it 6-3 in 33 minutes.

The players weren’t able to perform their best tennis in the second set due to periodic heavy rain. Djokovic made three breaks, two more than Kavcic, and served out the match 6-2 to set up all-Serbian semi-final encounter against his Davis Cup teammate Janko Tipsarevic.

With this victory Nole improved to a perfect 26-0 this season, and increased his overall winning streak to 28 wins in a row, dating back to last December’s Davis Cup final.

Novak converted 4 of his 5 break points, while Kavcic capitalised on 1 of his 2 opportunities.

Nole leads their H2H 2-0. Their last meeting was in the second round of the inaugural Serbia Open 2009.

Djokovic and Tipsarevic will play on Saturday at 8pm CET for a place in the “Serbia Open 2011 Powered by Telekom Srbija” final.