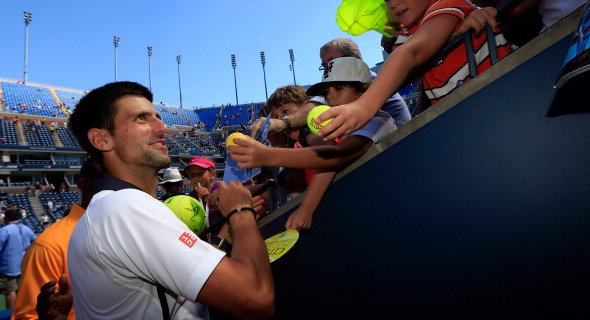 Nole has kicked off the Abu Dhabi exhibition event campaign with a 6-0, 6-3 semi-final win over world no.5 David Ferrer, in his first match since the ATP World Tour Finals in London.

He came back from a break down in the second set to win it 6-3 and booked a spot in the finals.

Nole will be again on court on Saturday about 14:00 CET, playing for his second Mubadala World Tennis Championship title against Spaniard Nicolas Almagro (11) who defeated Serb Janko Tipsarevic (9) 2-6, 7-6, 6-2.

The Serbian star is making his second appearance at the Abu Dhabi International Tennis Complex in Zayed Sports City.

“I love this court and the conditions here. I wish all the tournaments in the world were played here,” Djokovic said. “It’s definitely a great surface. It’s not too warm here, not too cold, it’s ideal to prepare on. I am surprised with my game considering it’s the first match of the official season. Hopefully I can play another good one tomorrow.”

It is a perfect three-day feast for tennis fans in the UAE, and a good warm up for Nole ahead of the first Grand Slam of the season, the Australian Open (January 14-27), where he will defend his title.