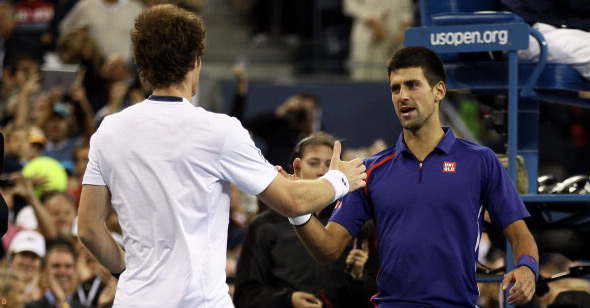 It has been 76 years since a British man last won a Grand Slam title (Fred Perry in 1936). Murray claimed his first major trophy at the fifth attempt.

“I want to congratulate Andy for his first Grand Slam,” Novak said. “He absolutely deserves it. I gave it all. It was another tremendous match to be a part of.”

It was a battle worthy of a major final, and the second-seeded defending champion and no.3 seed put on a memorable performance in difficult, windy conditions on Arthur Ashe stadium.

Players exchanged breaks twice in the first set and it went to a tie-breaker. Novak saved five set points, but Andy closed out the set on his sixth opportunity 12-10 after 87 minutes.

Murray was 5-2 up in the second set with a double break advantage, but Djokovic found his rhythm and fought back to level at five-all. The Dunblane native, however, broke once again in the 12th game for two sets to love lead.

Nole raised the level of his game in the third and fourth sets and with impressive performance and two breaks in each, came back from two sets down to level at 2-2.

It was maybe an extra day of rest for Murray that provided him advantage at the beginning of the decisive fifth set which was critical for the 25-year-old Serbian star. Andy broke twice to take a 3-0 lead. The 2011 champion broke back once and held for 2-3, but couldn’t do more. Murray held his serve, made another break in the seventh game, and served out the victory.

“It was incredibly tricky conditions,” Murray said during the trophy presentation. “After the third and fourth sets it was tough mentally for me… Novak is so, so strong. He fights till the end in every single match and I don’t know how I managed to come through in the end.”

Tonight’s match-up was the 15th between the pair and their second major final. It equalled the longest US Open final in history.

Andy joined Juan Martin del Potro as the only players to break the Grand Slam dominance of Nole, Roger and Rafa. The trio has won 29 of the past 31 majors dating back to 2005 Roland Garros.