Nole through to US Open semis after epic battle! 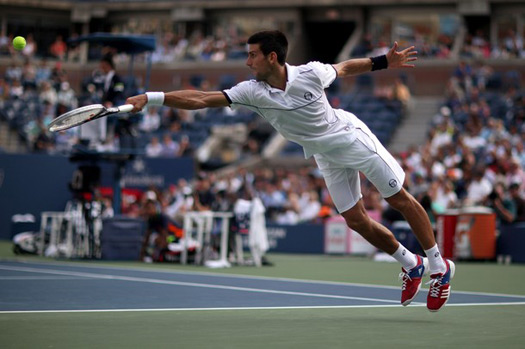 Nole is through to his fifth career US Open semi-finals!

Top-seeded Novak Djokovic came through his toughest test so far at Flushing Meadows on Thursday, winning his quarter-final match against fellow Serbian and world no.20 Janko Tipsarevic.

In the most dramatic match so far at the last Grand Slam of the season, the world no.1 clinched his 62nd victory in 2011 and is only one step from defending 1200 points he won last year by reaching the finals.

The first two sets were long and brilliant. It really was a titanic battle with great points, beautiful and breathtaking tennis.

The opening set at the world’s largest tennis stadium lasted 1 hour and 24 minutes. Confident Janko started better, breaking Novak in the very first game. He had another break point in the third game, but Nole managed to save it with a blistering ace. Djokovic capitalised on his second break point in the fourth game with a stunning forehand down the line and leveled the result. One more break in the sixth game and a hold for 5-2 lead, but Janko fought back, broke Novak’s serve twice to go 6-5 ahead. The 2001 Australian Open junior champion was serving for the set when Nole put the pressure on him and broke back to lead the set into a tie-breaker. The 24-year-old Belgrade native won it 7-2.

Tipsarevic put the disappointment of the lost set behind him and opened the second set with a commanding service game. Novak started the second set like the first. He double-faulted to hand Janko three break points. Janko used his chance, made an early break and held to increase his lead to 3-0. He again had opportunities to expand the lead, but failed to convert two break points in the fourth game. Nole came back, breaking Janko’s serve in the fifth game and holding for 3-3. The set was also decided in a tie-breaker. This time Tipsarevic claimed it, 7-3, and leveled the match at one set all.

Novak was dominant in the third set. He stepped up his game and raced to 6-0 with a triple break.

Janko was struggling with his movement and could no longer carry on. He retired being 0-3 down in the fourth set.

“Congratulations to Janko for a fantastic tournament and a great effort today,” Nole said in his oncourt interview. “He’s a great friend of mine and it was not easy to play against him today. I sensed when I made a break in the third set that he lost a lot of pace on his first serve and was not able to move so well.”

Next up for Nole is a five-time champion and world no.3 Roger Federer. The Swiss beat Frenchman Jo-Wilfried Tsonga in straight sets.