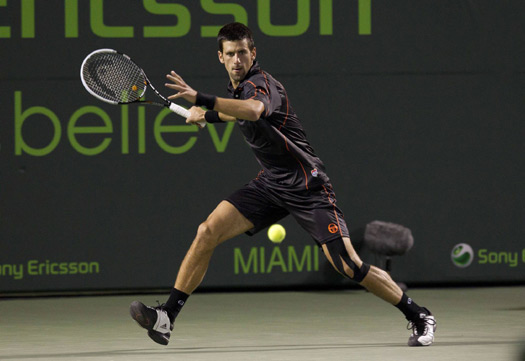 Second-seeded Novak Djokovic booked his place in the quarter-finals of the Sony Ericsson Open, the second ATP World Tour Masters 1000 tournament of the year, beating his friend and compatriot world no.17 Viktor Troicki in straight sets 6-3, 6-2 in 1 hour and 23 minutes.

Djokovic raced through his opening service game in just over a minute. A break in the fourth game was enough for Nole to take the first set 6-3.

The Australian Open champion earned two break points in the first game of the second set and converted the second opportunity to go ahead. The 23-year-old Belgrade native was cruising to victory on Grandstand as he broke Troicki’s serve for the second time in the third game, and then consolidated the break for 4-0. He served out the set and match 6-2 to continue his incredible record in 2011.

Novak will play against world no.40 Kevin Anderson of South Africa for a place in the semi-finals. The South African beat no.30 seed American John Isner 6-3, 7-6(4).

“I will have an opportunity to get my revenge in the same court where I lost in 2008,” said Novak. “But he keeps on playing really well on these courts, and you’ve got to give him credit for that. He beat some very good players. Big serve, very aggressive. So tomorrow night we are going to play where conditions are going to be a little bit slower, which I guess is a little bit better for me.”

STREAK UPDATE — Nole has the third-longest winning streak to start a season in the last 30 years, 21 wins in a row, behind Ivan Lendl in 1986 and John McEnroe in 1984. Here are the best starts since 1981: