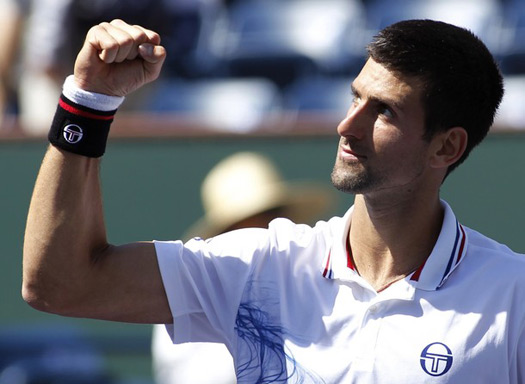 Novak dismissed 12th-seeded Spaniard Nicolas Almagro in straight sets 6-3, 6-4 in 81 minutes at the BNP Paribas Open on Thursday to reach the semi-finals of the ATP World Tour Masters 1000 event.

2008 and 2011 IW champion made a break in the fourth game of the opening set. The Spaniard bounced back, but handed the break straight back to the world’s best player to put the Serb back in front by two. This time Nole consolidated the break for 5-2 lead. He wrapped up the first set in 30 minutes with a love service game.

The top seed broke Almagro in the ninth game of the second set when the Spaniard hit a backhand long. Novak held serve to love in the 10th, an ace putting him 40-0 up before he ended the match with a crunching backhand winner down the line.

“It was always going to be a tough match,” Novak said in a courtside interview after reaching the last four. “Almagro is an established top 10 player. What made me very happy and satisfied with my game today was my serving. When I had chances, I used them.”

With the victory, Novak improved to 14-1 on the season. He is looking to win his third trophy at the Indian Wells Tennis Garden.

The 24-year-old will look to advance into the finals for the fourth time when he squares off against John Isner (11) on Saturday. The American defeated Frenchman Gilles Simon (13) in three sets 6-3, 1-6, 7-5.