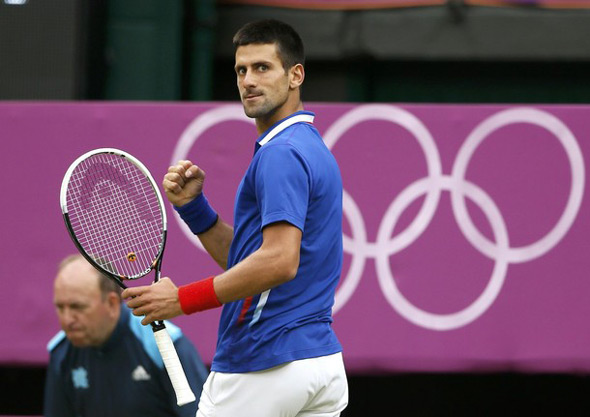 Bronze medalist from Beijing 2008 Olympic Games, Novak Djokovic, fought his way through to the quarterfinals of the 2012 Olympic tennis event on Wednesday after beating Australia’s Lleyton Hewitt on a packed Wimbledon Centre Court.

He capitalised on four of his seven break point chances and won 21 of 30 points on the net.

Hewitt got off to a strong start in the opening set. He made a break in the ninth game and sealed it 6-4 in 40 minutes.

Novak took control in the second set and was always ahead of his opponent, keeping him consistently on the run. He was serving at 5-3, but Hewitt broke back. The Australian was unable to hold his serve in the crucial 12th game, and Nole took the set 7-5.

Djokovic won five straight games from 1-1 in the deciding set for his sixth straight win over Hewitt in seven career meetings.

“I was trying to focus on my game and trying to see what I could do to get into his serve,” said Novak. “He was serving really well, with a lot of efficiency. I just needed to step in a bit. That’s what I did and I changed the momentum in the middle of the second set when I made a break. He broke back, but I felt I got back into the match.”

The 25-year-old Serbian star will play Jo-Wilfried Tsonga for a place in the semi-finals.

Fifth-seeded Frenchman defeated no.29 in the ATP rankings Feliciano Lopez of Spain
7-6(5), 6-4.