Nole tops Murray for second win in Group A! 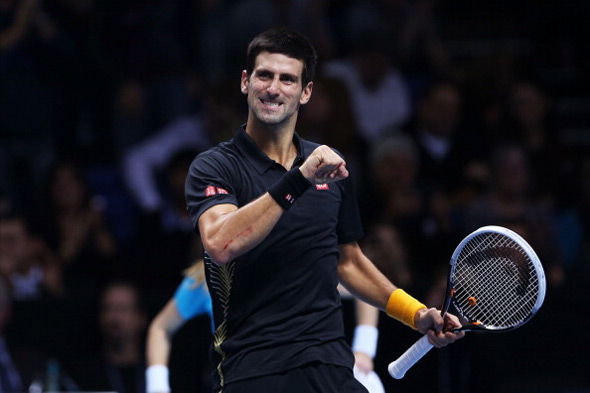 Top seed Novak Djokovic continued his ATP World Tour Finals title quest with a 4-6, 6-3, 7-5 win over world no.3 Andy Murray in two hours and 34 minutes at the O2 Arena in London on Wednesday.

Murray started strong, breaking Novak in the opening game of the match. He took the first set 6-4 in 44 minutes.

Djokovic raised the level of his game in the second set. His serve was better and his aggressive play brought him advantage in the sixth game when he broke no.3 seed for 4-2 lead. The Serbian tennis star sealed the set 6-3 in 38 minutes.

The 2008 champion made a break in the third game of the deciding set and consolidated it for 3-1. Andy fought back to level at 4-all. Nole managed to break his opponent once again in the 11th game and saved two break points before closing the set and match 7-5.

“It was another great match, another great performance from both of us,” said Djokovic.  “I didn’t expect anything less other than a tough match that went down the wire and was decided on the last point.”

“It was important for me after dropping a first set to stay mentally tough and believe that I could get my opportunities, and when they were presented to try to step in and use them. I don’t think I played bad in the first set. It was him playing really well, serving extremely well. He lost only a couple of points on his first serve throughout the whole set and then he made some unforced errors. He allowed me to get back to the match. Then I think it was quite even up to the last point.”

It was their seventh meeting of the year (Novak leads 4-3) with three of those meetings being particularly close – the Australian Open semi-finals (Djokovic won in a 4:50h five-setter), the US Open final (Murray won in a 4:54h five-setter) and the Shanghai final (Djokovic won in 3:21h, saving five match points). They also met in the semi-finals of the London Olympics with Murray winning 7-5, 7-5. This was their first meeting in a season finale and only the second indoor match in their rivalry (Novak won their previous meeting in ‘06 Madrid). Overall, Djokovic leads their H2H 10-7, including 8-6 on hard courts.

In recording his 47th hard-court match win of the season, the 25-year-old Belgrade native improved to a 72-12 record. He is bidding to capture his 34th tour-level trophy this week.

In five previous appearances at the season Finals, Novak has won his first 2 matches only once (in 2008, when he won the title)

Next up for the world no.1 is sixth-seeded Czech Tomas Berdych. Djokovic takes a 10-1 lead into their Friday encounter.

“The good thing about this format, it gives you a day to recover,” said Novak. “I’m going to need that day tomorrow. I will just try to take it easy, work on some things a little bit on the practice. Then, of course, get on the court and try to win.”