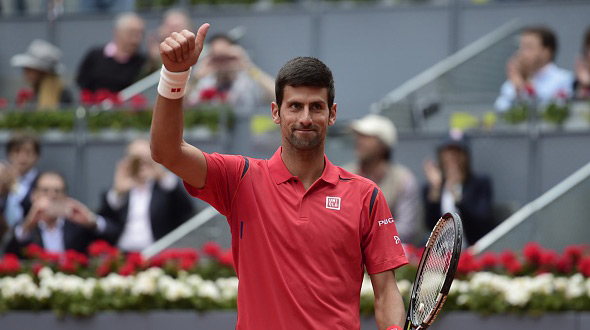 2011 titlist Novak Djokovic defeated Milos Raonic (11) 6-3, 6-4 at the Mutua Madrid Open on Friday to score his third win in the Spanish capital this week.

The Serbian star improved to 19-6 at the tounament after one hour and 43 minutes of play.

“One of the keys of the match was getting as many returns back in play as possible,” Novak said. “I knew that before I stepped on the court that I should not give him too many free points on his serve. That’s where the big servers get a lot of confidence. I returned exceptionally well. Every single player, especially big servers, have their patterns when it’s close. But sometimes it’s just instinct. It’s just anticipation, trying to be in the right balance and looking at the toss.”

For a place in the ATP World Tour Masters 1000 event final, Novak will face 2014 runner-up and sixth seed Kei Nishikori (JPN) on Saturday at 20.00 CET. The Belgrade native leads their Head2Head rivalry 7-2.

Novak is bidding to become the first man to win 29 ATP World Tour Masters 1000 titles. He is currently tied with Rafael Nadal with 28 shields. The world no.1 is attempting to capture his fifth trophy of 2016.