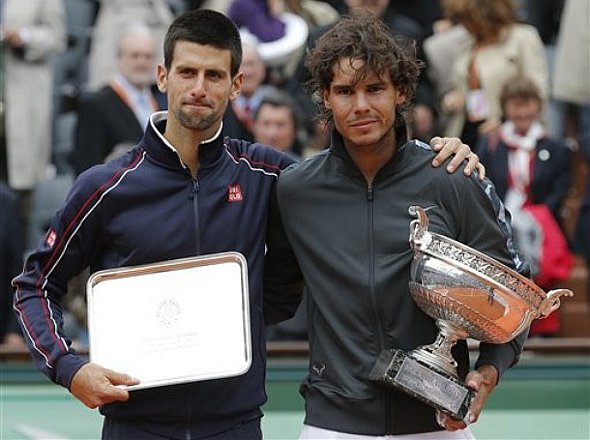 The historic French Open final between no.1 and no.2 seeds Novak Djokovic and Rafael Nadal was suspended on Sunday due to heavy rain in the fourth set. The result was 4-6,
3-6, 6-2, 2-1 when the match referee called the players off court.

History was at stake for both men, Nadal was playing for a record 7th Roland Garros title; Nole was looking to become the first man since Rod Laver in 1969 to win four straight majors.

Novak had a slow start. Nadal was up a double break, when the top seed picked up his game. He broke back twice to level at 3-all, but a double fault handed the Spaniard third break and he took the opening set 6-4 in 58 minutes.

A double fault again handed Nadal a break on second advantage and the Spaniard began the second set as he had the first. Djokovic broke back for 2-2 and held to 30 to lead for first time in the final. However, he was broken for the fifth time in the match in the seventh game. Nadal consolidated the break with a love service game for 5-3 when the rain forced players from the court. After a 34-minute rain delay the Manacor native broke Novak to take the set 6-3.

It looked like Nadal was marching towards his record seventh Roland Garros title after breaking Nole in the opening game of the third set and holding for 2-0. But in an astonishing turn of events, the 25-year-old Serbian star fought back and won six straight games to see the Spaniard drop his first set at the French Open since his first round win over John Isner in 2011. Novak was hitting flatter, harder and deeper and his aggressive game paid off.

The world no.1 kept the momentum going into the fourth set. He won an exhausting 44-shot rally, made a break and held to love for 2-0 lead winning his eighth game in a row. At 2-1 rain suspended play for the second time.

Nadal started strong breaking in the opening game to level at 2-2. Nole was keeping pace with the Spaniard until the 12th game, but made a double fault on a match point and Nadal won his seventh French Open trophy.

“Today, he started strong. I started slower. I was a little bit unfortunate in that first game and things turned around,” Novak said after the epic match. “I feel really privileged to be in this position, being in the final at Roland Garros for the first time. I enjoyed the match, Rafa was the better player. I don’t like going back and saying, ‘Okay, maybe this could have gone better.’ Everything in life is a lesson, and that’s the way it goes. I hope I can come out stronger and better from this experience.”

After his first Roland Garros final, Nole heads to Wimbledon, the third Grand Slam of the season, where he is a defending champion.