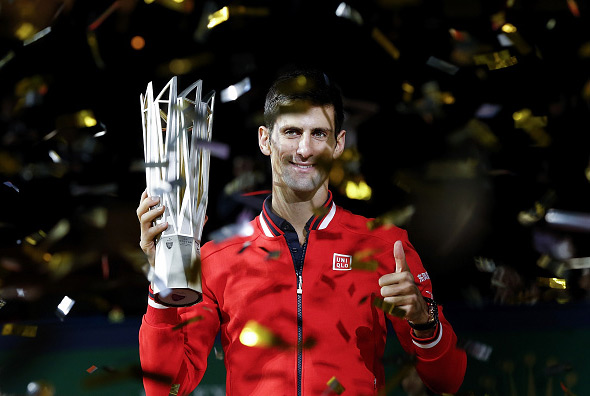 Nole is the King of 2015 Shanghai Rolex Masters!

Novak Djokovic won the Beijing-Shanghai double for the third time (also in 2012, 2013) when he defeated Jo-Wilfried Tsonga 6-2, 6-4 to lift a record third trophy at the ATP World Tour Masters 1000 event on Sunday.

The top-seeded Serb extended his H2H series with the Frenchman to 14-6 after the one-hour, 18-minute victory, preserving a perfect record in China finals (10-0).

Novak got off to a roaring start with an early double break for 3-0. Tsonga broke back once, but was not much of a threat in the rest of the match. The Serbian and world no.1 went on to take the first set 6-2, and made a crucial break in the ninth game of the second set, then served it out for 57th career title.

“Today the key was to get as many serves back into play to Jo because he has one of the biggest serves in the game,” said Djokovic. “He showed that in the second set, with some early break points. He came up with some aces, some big serves. Generally, I felt always in control of the match. I won many of my service games very comfortably. I didn’t allow him to get into the rhythm. Today’s match, and overall the tournament, has gone incredibly well for me.”

Here’s how @DjokerNole sealed his victory in Shanghai over #Tsonga. http://t.co/dXdZEziG7N

Djokovic did not drop a set at the entire tournament. He also beat Martin Klizan, Feliciano Lopez, Bernard Tomic and Andy Murray.

Nole has been in impeccable form this season. It was 13th straight final. He has won nine titles (three Major trophies, five Masters 1000 shields and one ATP 500 crown). With 25 Masters titles to his name, the 28-year-old Belgrade native surpassed Roger Federer and is just two shy of Rafael Nadal who is holding the all-time record with 27 Masters trophies.