Nole’s interview after his third round win at Wimbledon! 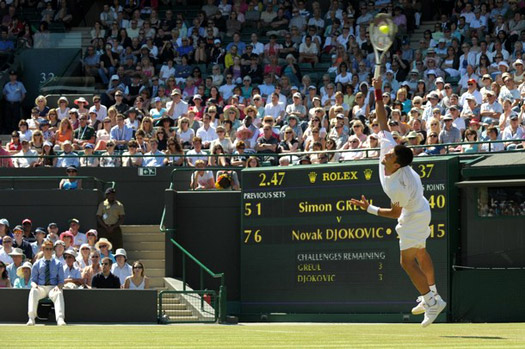 Nole gained revenge in the third round of Wimbledon for his countryman’s earlier defeat (Fish beat Tipsarevic 3-1), and what’s more important he reached the fourth round, after being eliminated in the second last year.

On journalist’s question why he thinks he‘s not getting the kind of respect that a top four seed deserves Novak answered:

”Well, I don’t know if that is a question for me. But, anyway, I realize the situation that I am in right now. You know, Andy Murray and Roger Federer are in the spotlight, and obviously, you know, they deserve to be in that situation because they have been playing great tennis the last six, seven months. But you have to look from the brighter side. I think it’s good. It releases kind of the pressure for me. Today I performed the best match so far in Wimbledon, which is really encouraging for continuation of the tournament. If I play my next matches like today, I think I have a good chances to get far in the second week.”

From the beginning of the competition Novak has had a great support from his box, especially of his brother Djole.

”I hope he’s going to take the best out of every tournament he watches and every match. I’m really happy that I have the support of my closest ones, my family and my brothers. I have always been emotionally very connected to them, and their support means a lot. You know, whenever they are able, they come to support me. And the youngest brother, hopefully, is going to follow in my footsteps and do even better one day.”

Novak made a great performance of Michael Jackson’s Thriller in Monte Carlo a few years ago. The Serbian tennis player was shaken by the news of the death of the king of pop.

”I’m shocked like everybody. I think there’s not much to say about that. Really disappointing. All the world is probably listening to his music right now.”

”We always have this players’ show in Monte Carlo during the event, we impersonate some players, we do some locker room stuff, what the players do good and bad, on and off the court, and then we do some dancing stage, whatever. It was two years ago. We choose the video. So we chose Thriller and I was him, so you can imagine what it looked like.”