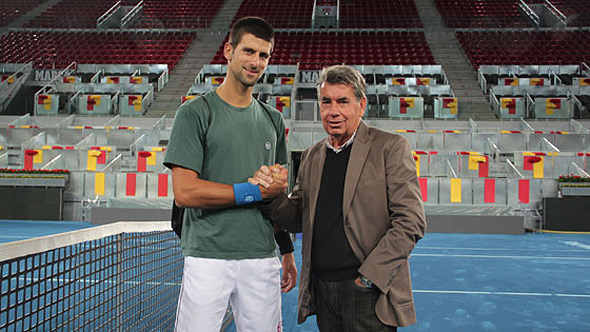 The Mutua Madrid Open’s reigning champion arrived in the Spanish capital on Wednesday.

Less than a year after lifting his first Madrid Masters trophy on the Manolo Santana Stadium Centre Court, Novak returns to the venue as the world no.1.

The traditional red surface has been replaced by blue clay. After his first training session, Djokovic spoke about his impressions of the change and about his memories of the last year’s victory.

We bring you an exclusive interview with Nole by Roberto Hernández and Gian Matteo Mannering.

Novak, one year after your win here and you’re in Madrid again. How does it feel to be back?

First of all, I love being in Spain I think Madrid is one of the most beautiful cities in the world, so I have only the fondest memories of this city, especially last year when I won the tournament in Madrid, which is considered one of the most important clay events. So, I’m happy to be back. I came early. I didn’t play the Belgrade tournament because I wanted some time for myself to regroup and get my batteries charged, and now I’m ready.

What are your fondest memories of last year’s final here in Madrid?

It was the first match that I ever won against Rafa on clay, so that was a big win for me. He was definitively, and still is, the best player in the world on this surface. I mean, it’s incredible what he does year after year. He’s the ultimate challenge to play against on this surface. I also remember the full stadium, the great atmosphere and we both came up with some incredible shots and points. It was a big success for me, it was a big confidence boost and from that moment on I believed that I could beat Rafa on clay, that I could win big tournaments on this surface and I was very thrilled.

What are your first impressions after training on the Mutua Madrid Open’s new blue courts?

I have a lot of impressions. Well I think I need some time, actually I need a couple of days to practice on this surface until I can give a clear judgement on how this surface is and what it feels like. The first impression is that the bounce is a little bit different. Especially with the slice, it bounces low. It’s hard to judge. It’s the first time that I’ve ever played on blue clay. I’m sure these people are doing everything they can to prepare these courts so that players feel comfortable, but it’s only Wednesday and there is still a lot of time until my first match.

Novak, you have won almost everything. What are your objectives now?

I definitely want to perform well and try to win the tittle in every tournament that I play in. I have very high goals. I have been playing the best tennis of my life in the last year and a half and I’m trying to keep this momentum going. Obviously the high goals are Roland Garros and the Olympic Games.

You a have a lot of fans in Madrid and Spain. What can you tell to them ahead of this tournament?

I’d tell them come to the tournament and enjoy the tennis. Obviously I respect Spain because it has produced so many successful athletes, first of all. Not just tennis players, but football and basketball players. Spain is a nation of sport. Every time I come here I enjoy myself because people really appreciate tennis players at this event. You are walking around the city and people come to you and give you a lot of words of encouragement and that is something that is very flattering for me.