Novak “back in business” after tourist trip to LA! 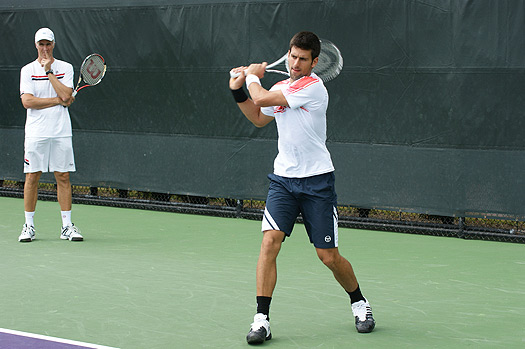 Novak Djokovic, who is looking to add to his 2007 title at the Sony Ericsson Open in Miami, insists he is “back in business” after relaxing after a busy couple of months with a sight-seeing visit to Los Angeles.

”We don’t have that much time to explore the sights of the different cities, because most of what we see is tennis club and hotels.

”This time I had a little bit more time to go without practice. I needed that after Dubai and Davis Cup. So I took some time off and relaxed, and now I’m back in business.”

Novak, who has a 12-4 record at the ATP World Tour Masters 1000 tournament in Miami, has been working hard on his physical preparation with two-time former Grand Slam finalist Todd Martin this week.

”I’m trying to develop some things in my game and improve service a little bit. I’ve been struggling with my serve lately, so we’ve been trying to work on that. But it’s a slow process that requires time, so I have to be patient.

”My main goal is to try to win another Grand Slam this year. I will do everything to get ready for Roland Garros, and, of course, Wimbledon and the US Open. If I play as well as I did on clay last year, I have a good chance.”

World No. 2 Djokovic will meet Olivier Rochus in the second round.