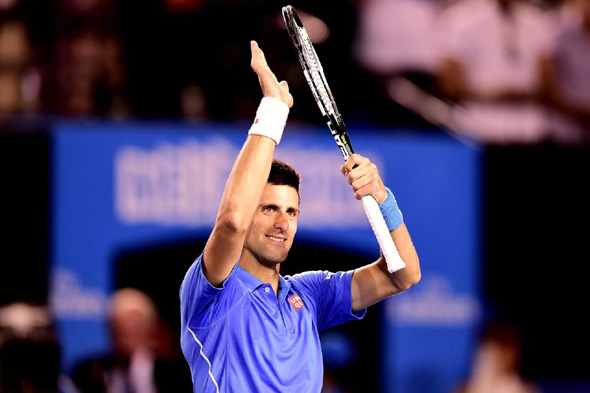 Top seed Novak Djokovic advanced to his fifth Australian Open final as he fought past defending champion Stan Wawrinka 7-6 (1), 3-6, 6-3, 4-6, 6-0 in a dramatic contest that lasted three hours and 30 minutes.

It was their third five-setter in Australia. Last year, the Swiss won 9-7 in the fifth set of their quarter-final meeting, and two years ago Nole defeated Wawrinka 12-10 in their fourth-round clash decider. Djokovic now leads 17-3 in their ATP Head2Head series.

The 27-year-old Belgrade native has improved to a 49-6 match record at Melbourne Park and extended his winning streak against Top 10 players to 9 matches.

With so much at stake, this match provided plenty of drama. It was characterised by too many unforced errors on both sides, with the occasional flash of brilliance.

Novak twice moved a set in front but neither of players could string together their best form for long enough to take command. Despite being below his best, Nole found a way to win, breaking Wawrinka three times in the fifth set to book a place in his 15th Grand Slam final.

“I made my life very complicated on the court,” said Djokovic. “Playing semi-finals against defending champion, there’s a lot of tensions, a lot of emotions. I was too defensive in the second and fourth set and Stan stepped it up. After that, I managed to stay consistent and tough in the right moments and served well when I needed to. I’m happy and satisfied to go through. I’m proud of the fighting spirit that I had. But the level of performance was not where I wanted it to be. Credit to Stan for playing well.”

Novak will take on no.6 seed and three-time runner-up Andy Murray on Sunday in attempt to win his eighth Grand Slam title. It will be the 24th career encounter between the two (15-8 H2H record).

They met four times in Grand Slam finals. Novak was victorious at Melbourne Park, in 2011 and 2013, while Andy triumphed at the 2012 US Open and 2013 Wimbledon.

Looking ahead to the clash with Murray, Djokovic said: “Andy and I go back to when we were twelve years old. We know each other for a long time. It’s nice to see we’re playing another Grand Slam final against each other. We’ve played many, and hopefully we can come up with a big match. He’s been playing some great tennis these couple weeks. It’s going to be necessary to perform at my best and play the best match of the tournament if I want to win.”

The Serb is bidding to become the second man in history to win the Australian Open for the fifth time. He won his first major championship Down Under in 2008 and went on to win three successive titles from 2011-13.