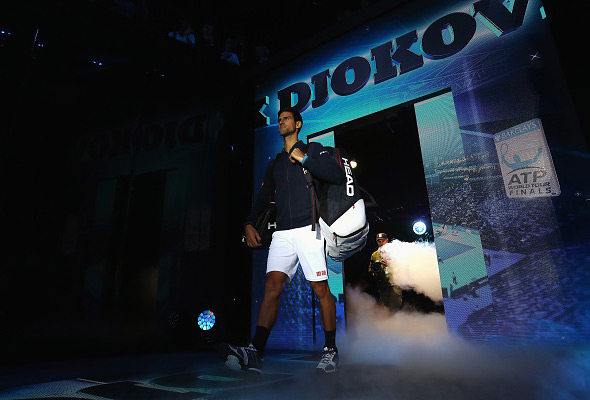 Defending champion Novak Djokovic kept up the pressure in the race for the year-end no.1 ranking with a convincing 6-1, 6-2 win over world no.11 David Goffin at the Barclays ATP World Tour Finals on Thursday.

The Belgian was an alternate at The O2, making his tournament debut stepping in after no.6 seed Gael Monfils withdrew from the season finale on Wednesday with a rib injury.

The Serbian ace had already qualified for the semi-finals in London. He completed the “Ivan Lendl” Group competition with a 69-minute triumph, which was his 750th career victory.

Novak broke his rival twice in each set, and saw off the only break point he faced in the final game. He won 83% of his first service points and was 7/11 when approaching the net.

“Undoubtedly, I felt the most comfortable today from all three matches I’ve played this week. I felt like I increased the level of the quality of tennis, so that’s a good sign,“ Novak said. “I was preparing to play Gael and then I found I was going to play David. It was hard for him to come out here, he didn’t play his best tennis. This is one of the best tournaments in the world, and I’m just enjoying myself on the court.”

Novak will face the second-place finisher in Group “John McEnroe”, no.5 seed Kei Nishikori, on Saturday at 21:00 CET. He owns a 10-2 record against the Japanese.

Djokovic is hoping to clinch year-end no.1 for the third straight year and fifth time overall.