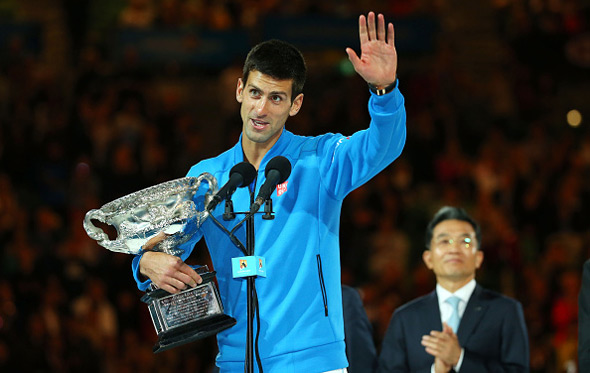 The pair squared off for the 24th time. Djokovic now holds a 16-8 ATP Head2Head edge.

Novak also beat Murray in the 2011 and 2013 Australian Open final. The victory marks his 50th match win at Melbourne Park.

It was another remarkable match that lasted three hours and 39 minutes.

The first set was a 72-minute marathon that proved why Nole and Andy are among the best athletes in the world. Novak lead by a break twice, but Murray fought back to force a tie-breaker. Djokovic prevailed 7-5 to move ahead.

The second set was even longer than the opener. It lasted 80 minutes. After surrendering a break in the second game, Novak broke twice to go 4-2 up. The Dunblane native came back once again and went on to win a tie-breaker 7-4.

Determined Novak rallied from 0-2 down in the third set to take it 6-3 in 39 minutes.

The 27-year-old from Belgrade raced to a 6-0 in the fourth set, extending his winning streak against Top 10 opponents to 10 matches. This trophy is his 49th career singles title.

“I think the willpower I had on the court today took me to where I am now,” Novak said. “Winning the eighth Grand Slam title and being mentioned in the elite group of legends in our sport is a huge privilege and honour. I can’t say how proud I am. It’s going to serve definitely as a great deal of inspiration for the rest of my career.” 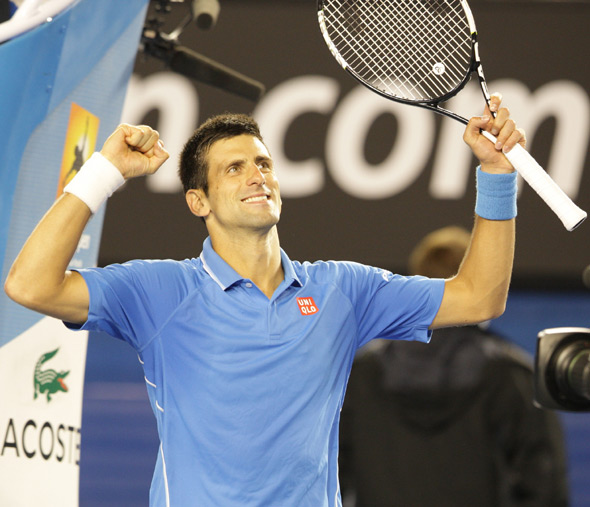 Novak is just one title short of legend Roy Emerson, the AO champion of 1961, 1963-67, who presented him with the trophy. “I’m so privileged and honoured and grateful to be standing here as a champion for the fifth time, to be in an elite group of players with Sir Roy Emerson, Rod Laver and all the legends of the sport,” said the Serbian star.

With this remarkable win, Nole consolidated his no.1 ranking with 3,800 points ahead of Roger Federer.

Next stop for Djokovic will be the Dubai Duty Free Tennis Championships from February 23-28. The four-time former titlist lost to Federer in the semi-finals last year.