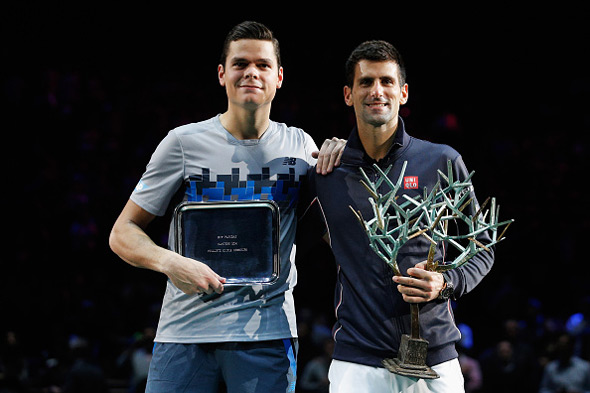 World No. 1 Novak Djokovic recorded the 600th match win of his career on Sunday by beating no.7 seed Milos Raonic 6-2, 6-3 in the BNP Paribas Masters final at the Palais Omnisports de Paris-Bercy.

It is the third time that Djokovic has won the Paris crown, having previously triumphed in 2009 (d. Monfils) and 2013 (d. Ferrer).

The Belgrade native went up against Raonic for the fourth time, having improved the pair’s H2H record to perfect 4-0.

In a devastating display, the top seed clinched victory in 83 minutes.

Novak broke twice to take the opening set 6-2. He raced to a commanding 3-0 lead in the second set and kept the advantage till the end.

“This win is for my son, this is the first tournament I won since becoming a dad,” said Novak, who returned to action this week after the birth of his son Stefan. “I played my best match of the week. I’m very happy to be standing here with the trophy.”

Novak will now travel to London to compete at the season finale, the Barclays ATP World Tour Finals, taking place at The O2 Arena (November 9 – 16).

The two-time defending champion will be making his eighth appearance at the world’s biggest indoor tournament.

With the victory in Paris, Nole clinched his sixth title of the season, having also triumphed at the Indian Wells, Miami and Rome Masters events, Wimbledon and Beijing.

Like every great player, Djokovic has taken the sport to the next level. Federer made everyone play better; Nadal too. Djokovic has added his own stamp on the sport – a driven champion, who combines sheer athleticism with a will to win at all costs.
(Josh Meiseles, ATPWorldTour.com)