Novak blasts past Fognini to reach quarter-finals in Melbourne 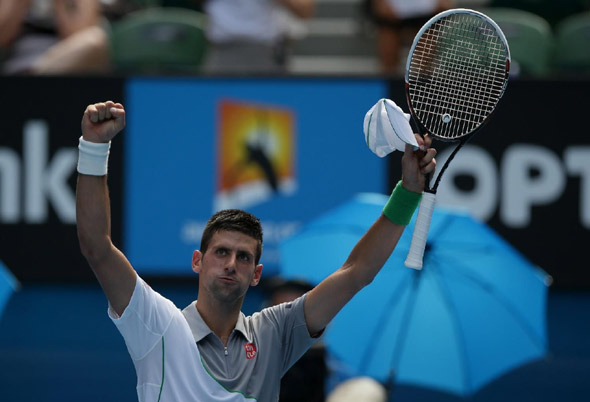 World no.2 Novak Djokovic extended his unbeaten run to 28 matches on Sunday afternoon as he reached the quarter-finals of the Australian Open with a comfortable 6-3, 6-0, 6-2 win over Fabio Fognini on Rod Laver Arena.

Novak landed 88% of his first service points and broke six times from 22 opportunities, not giving the Italian a single chance for a break during the match that lasted 1 hr and 32 mins.

“It’s never easy, but I think I played a great match from the beginning to the end,” the defending champion said. “I’ve been elevating my game as the tournament is going on. Every match is better. The general feeling on the court, all the shots, using the court position really well, being aggressive, playing my style of the game… I feel great about myself in this moment.“

The 26-year-old Belgrade native has a 15-2 FedEx ATP Head2Head record against the Swiss. He defeated Wawrinka 12-10 in the fifth set in last year’s Round of 16, an epic battle that concluded at 1:41 in the morning. The match lasted five hours and two minutes.

“I have to be ready to play another 12-10 in the fifth like last year. I know that he’s playing the tennis of his life in last 15 months. He’s a top 10 player now. He’s established himself in the top. He won against some top guys in big tournaments,“ Novak said about his next rival. “He is confident. You could feel that mentally when he comes to the court, he believes in himself more. He can win against the top guys in the later stages of events, so you cannot expect a clear favorite in that match.“

Djokovic joins Roger Federer, Stefan Edberg and Ivan Lendl as the only men to reach at least seven consecutive quarter-finals at the Australian Open in the Open Era. The Serb is chasing his fourth successive title in Melbourne and fifth overall.