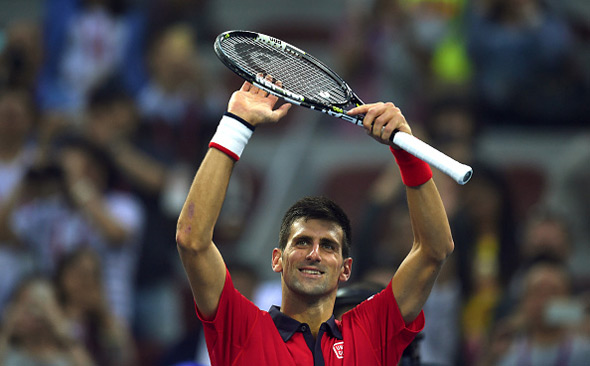 World no.1 Novak Djokovic improved to a 28-0 lifetime mark in Beijing as he dismissed no.4 seed David Ferrer 6-2, 6-3 in a solid semi-final performance on a chilly day at the National Tennis Center on Saturday.

The top-seeded Serb sealed the victory in 73 minutes. It was his 67th win this year.

Novak landed 75 per cent of his first serves and converted six of eight break-point chances, having won more than 50 per cent of the points on the Spaniard’s serve. There were two blips for the Belgrade native as he dropped serve once in each set, but he was quick to react and clinch his 16th win in 21 meetings with Ferrer.

“I served very well throughout the entire match, especially in the first set with 79% of the first serves in,” said Djokovic. “But I didn’t get too many free points on the serve. He was getting a lot of returns back. He always made me play an extra shot. I did exceptionally well on the return games, putting a lot of pressure on him from the first ball. The first shot was a really quality shot from my side tonight, and that’s what I was looking for. To kind of impose the aggression from the first shot, not allowing him to get into the longer rallies and get into the play. It worked very well.”

They have met a record 44 times already, Rafa holds the edge in the pair’s career head-to-head series 23-21.

Looking ahead to the blockbuster final, Nole said: “I always expect a battle with him and always prepare myself for the battle. There are no secrets. I know he’s going to try his best tomorrow to win this title, and I will do, too. I think we are both on a very high level; we know how to play these big matches. I’m sure we’re going to go out and play some good tennis for the crowd. The better player will win.”