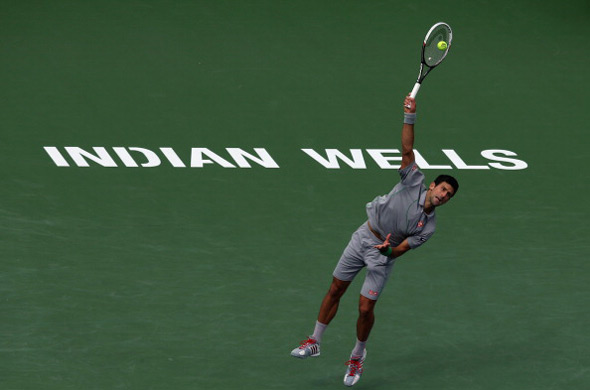 BNP Paribas Open second seed Novak Djokovic recovered from a slow start to beat Marin Cilic of Croatia 1-6, 6-2, 6-3 on Wednesday night and reach the quarter-finals of the ATP World Tour Masters 1000 event for the seventh time.

The match lasted one hour and 45 minutes.

Novak struggled to find his rhythm in the opening set. Cilic made a double break and won it 6-1 after just 27 minutes of play.

The 2008 and 2011 champion raised his game in the second set, landing 91% of his first service points and breaking the Croat twice to force a decider.

He kept the pressure on and with a break in the second game of the final set recorded his eighth win over Cilic in as many career meetings.

“It was very tough. Marin was a far better player in the first 45 minutes. He was striking the ball incredibly well,” said Djokovic. “I tried to stay calm and composed and believe that I could come back.”

Djokovic is making his ninth appearance at the Indian Wells Tennis Garden (35-6). With this win he improved to a 9-2 season mark.