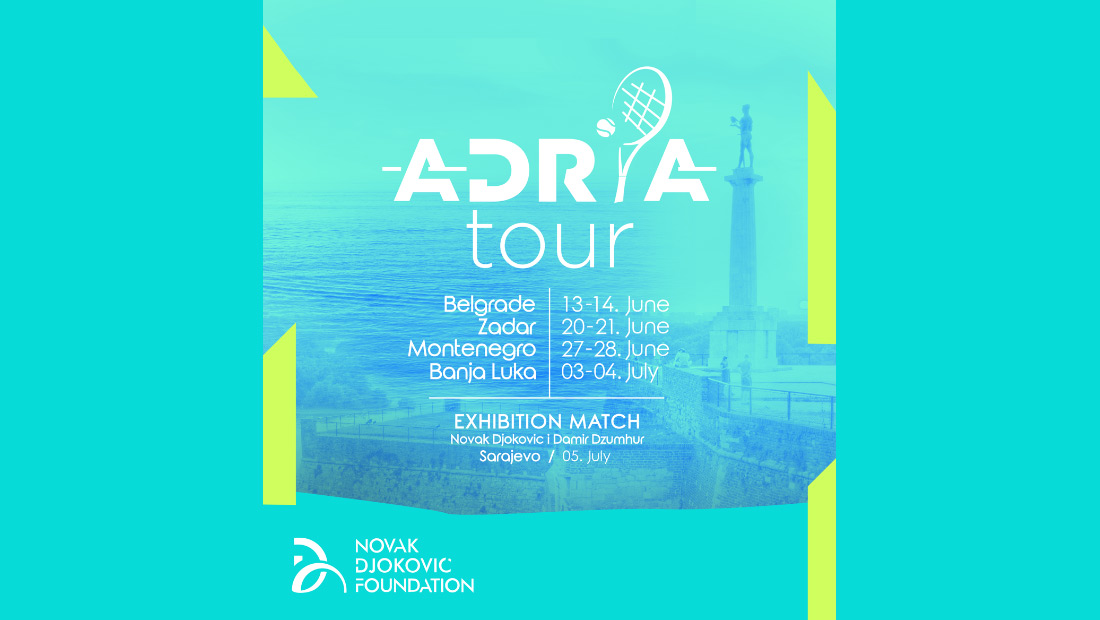 The best tennis player in the world, Novak Djokovic, brought together top tennis aces who will present themselves to the audience at the regional Adria Tour event from 13 June to 5 July. Organised by our champion, Adria Tour will be held in cities across the Balkans, with the kick-off tournament to be organised in Belgrade, on the TC Novak courts (13/14 June), followed by Zadar (20/21 June), Montenegro (27/28 June) and Banja Luka (3/4 July). In addition, part of it will be held in Sarajevo, on Sunday, 5 July, where Novak and Damir Dzumhur will play an exhibition match.

In addition to Djokovic, who will play all the tournaments, the biggest star of this sporting event will be the 26-year-old Austrian, Dominik Thiem, third-ranked tennis player on the planet, three-time Grand Slam finalist, winner of 16 ATP Tour titles, including one of the Masters 1000 Series titles in Indian Wells.

Participation in the Adria Tour in Belgrade was also confirmed by Grigor Dimitrov from Bulgaria, whose career-high ranking was world no.3, and who currently ranks 19th in the world. He has won eight singles titles in his career so far, and is one of the best competitors from this region.

Among the local players, Viktor Troicki will also play, a member of the golden Serbian generation from 2010 that won the Davis Cup, but he also won for our country the team ATP Cup this year, as well as the World Cup in 2009 and 2012. His biggest achievement was career-high singles ranking of world no. 12 in 2011. He has won three singles titles so far, the Kremlin Cup and two titles in Sydney.

Other major European players have announced their participation in the charity tournament, the aim of which is to raise funds for humanitarian projects across the region, including the Novak Djokovic Foundation’s Early Childhood Development and Education programmes. At the same time, the organisers wish to help tennis players get back in shape and gain access to some competitive tennis in the COVID-19 situation.

The system that will be applied is Round Robin, which means that everyone will play against everyone in two groups, with 4 players each. Specifically, on Saturday, each tennis player will play two league matches, and on Sunday, another league match, to be followed by the grand final between the two league winners. The planned format is best of three sets, up to 4 games per set.

In case the presence of the audience is allowed, tickets will be available for two sessions per day, and the times will be announced later. The programme will include doubles with celebrities, as well as tennis events for children. All matches will be broadcast on Sportklub TV channels, with images from the region reaching all parts of the world.

The Adria Tour sports event in Belgrade will be preceded by the tournament of the Tennis Association of Serbia, in the standard format from the qualifications, starting on Monday, to the finals, which will be held on Friday. The prize money for the tournament has already been secured by the Association with the help of Novak Djokovic.