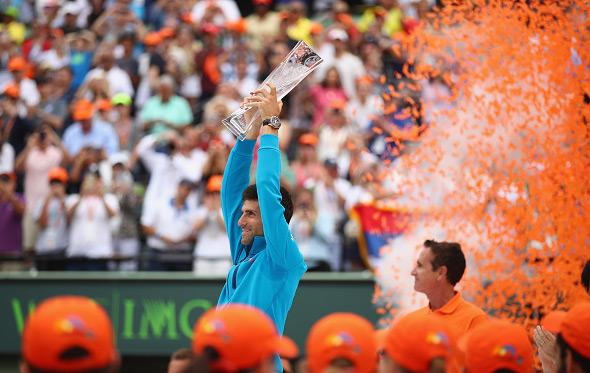 World no.1 Novak Djokovic made Sunday a historic day at the Miami Open presented by Itaú.

Novak and Kei traded service breaks twice in the opening set before Djokovic broke once more in the eighth game and held to love for 6-3 in 34 minutes.

The momentum continued in the second set with the Belgrade native breaking his rival twice, in the first and ninth games. He converted on his third match point to claim his 63rd career title and tie Andre Agassi’s tournament mark of six trophies.

“It was my best performance of the tournament,” Djokovic said. “It came at the right time against a great player. I thought he started very well, breaking my serve in the first game and coming up with some aggressive play. I needed to answer right back, which I did in the following game – that helped me mentally.”

Novak captured his fourth title of the season after being victorious in Doha, Melbourne and Indian Wells, and improved his stellar record for the year to 28-1.

The Serbian tennis star did not drop a set en route to the triumph, just like in 2007, when he won his first ATP Masters 1000 trophy at Key Biscayne, becoming the youngest winner in tournament history (at 19 yrs., 314 days).

“Every year that I come back to Miami, I go through those memories from 2007, the first Masters I won. It opened a lot of doors for me, gave me a lot of self-belief,” Nole added. “I started to realize I was able to win the big trophies and beat the best players in the world.“

What Novak achieved in Miami:

“The fact I managed to win the most Masters ever is a remarkable achievement I’m very proud of. It’s quite amazing. To put myself in position to have records and be in history books is a great accomplishment. Hopefully I can make many more records.” 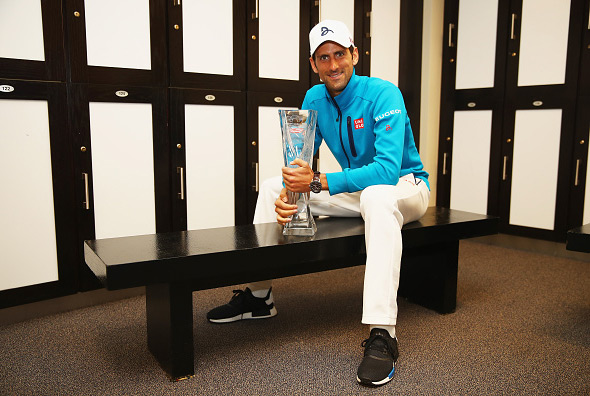 Next tournament for Novak will be the Monte-Carlo Rolex Masters from April 10-17 where he won 2nd crown last year beating Tomas Berdych 7-5, 4-6, 6-3 in the final.