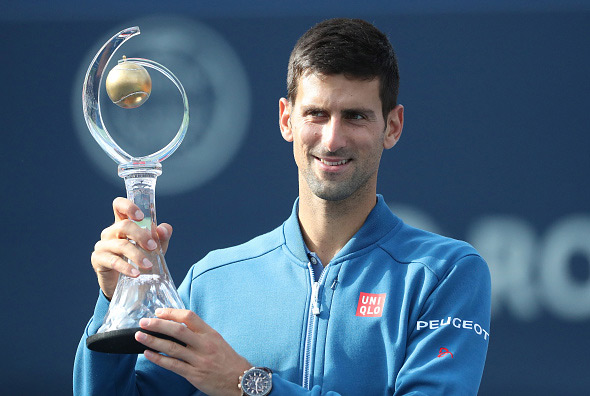 World no.1 Novak Djokovic has become the first man in history to win 30 ATP Masters 1000 titles after defeating no.3 seed Kei Nishikori 6-3, 7-5 in Toronto final on Sunday.

Novak clinched his fourth Rogers Cup championship and 66th career trophy in one hour and 22 minutes. He stands on top of the list of ATP Masters 1000 title leaders.

Accurate serving and powerfully-struck ground strokes, as well as a break of his opponent’s serve in the sixth game, were enough for the top seed to settle the first set.

The 29-year-old Serb broke Nishikori’s serve in the third game of the second set and held to go up 3-1. The Japanese created three break point chances on Djokovic’s serve in the sixth game and converted his second opportunity to break for the first time. In a key 11th game, Novak capitalised on his break point, which gave him the chance to serve out for the win.

Nole, who has now won seven titles this year, has beaten Nishikori on nine successive occasions and leads their H2H series 10-2.

“My two best performances came in the semi-finals and the final,” said Djokovic. “It came at the right moment for me. It’s a process that has happened many times in my career, where I would start a tournament still feeling a little bit uncomfortable on the court and searching for my rhythm, and then, as the tournament goes on, I find that proper comfort level with shots, with the way I feel, with my mental attitude.”

Novak next heads to Rio de Janeiro, Brazil, where he will represent Serbia at the 2016 Summer Olympic Games. The tennis event will take place from August 6-14.

Djokovic won the Olympic bronze medal in Beijing 2008. In London 2012, he fell in the bronze medal match to Juan Martin del Potro.

“It’s the biggest sports event in the history of the sport, so to be part of it is already a huge privilege and honour that I will cherish, as I did in Beijing and London,” Nole said ahead of Rio 2016 Olympics. “You represent your country, and you’re part of something larger than just the tennis event. I look forward to that. I’m going to try to extract that positivity out of that huge attention and energy that will be directed into the Olympic Games and hopefully put myself in a position to battle for a medal.“