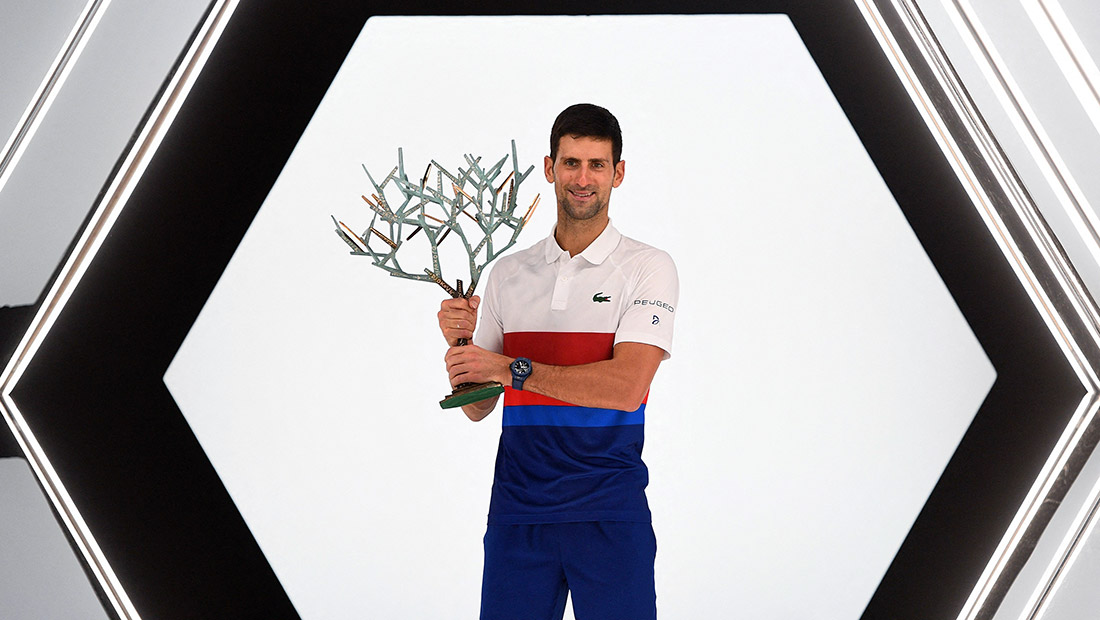 World no.1 Novak Djokovic rallied from a set down to beat defending champion and no.2 seed Daniil Medvedev 4-6, 6-3, 6-3 in two hours and 15 minutes, for sixth title in Paris and a record-breaking 37th Masters trophy.

After the players had traded break once, Medvedev stole Nole’s serve again to move 4-3 up and kept the advantage to take the first set.

The Belgrade native grew in confidence towards the middle of the second set. He broke in the fourth game and saved three break points serving at 5-3 to take the match to a decider.

Riding the momentum, Djokovic stormed to a 5-2 lead in the third set. The Russian broke back once, but Novak made another break in the ninth game to close out the exceptional match and win the 86th career title.

“I went back and reviewed the final of the US Open to see what I did wrong and what I did right,” Novak said after the match. “I tried to read the patterns of his serve and the ball toss, maybe. I tried to look for the small details, because it was a match of small margins. He started better, broke my serve in the first game and I came back. He served the first set out pretty comfortably, but I felt as if I was there. I thought it was only a matter of time when I was going to read his serve better, and start to make some plays. You can’t go through him. You have to find a way to play with controlled aggression, play the right shots at the right time and make him come in. It’s variety that wins matches against him. We both suffered on the court and there was a lot of gruelling rallies.”

It was the first Paris final to feature the top two players in the ATP rankings since 1990 when Stefan Edberg and Boris Becker met.

In another remarkable season, Novak secured year-end no.1 for a record seventh time on Saturday by reaching the Rolex Paris Masters final.

The 34-year-old Serbian star will next head to Turin, Italy, for the Nitto ATP Finals. The season finale be held at the Pala Alpitour from November 14 to November 21.