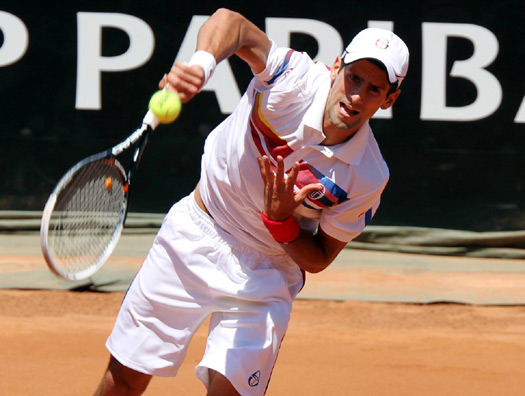 Second-seeded Novak Djokovic continued his great run of form with a 6-0, 6-3 victory over Poland’s Lukasz Kubot on Wednesday to advance into the third round at the Internazionali BNL d’Italia, an ATP World Tour Masters 1000 event in Rome.

Another great performance from Nole! He opened his Rome campaign in style, crushing world no.141 in 67 minutes.

Djokovic made a triple break in the opening set for 6-0.

A break in the second game of the second set was enough for the Serb to win the set and match 6-3.

“It is a great way to start,” said Novak in his post-match interview. “It is always great to have a straight set win and spend less time on the courts and save some energy for coming rounds.”

Djokovic converted 4 of 5 break points, and didn’t give a single break point opportunity to his opponent.

The 23-year-old Belgrade native has won all six tournaments he has played this year – the Australian Open, Dubai, Indian Wells, Miami, Belgrade and Madrid.

He now has a 33-0 mark this year which is the longest win streak to start off an ATP World Tour season after John McEnroe’s 42-0 start in 1984.

Nole has an opportunity to take over the no.1 position in the ATP Rankings next week, if he wins the title and Nadal loses before the semi-finals.

“My ambition or goal is to be no.1 and my dream is to win Wimbledon so these are two things that I always wanted to do,” said Novak on Tuesday. “The no.1 ranking is obviously getting closer but it still takes a lot of work to get there. If I do get there in a couple of weeks or months or a couple of years, it does not matter. I will try to keep working to get to this position.”

“He has been around for many years and is a great all-round player,” Djokovic praised his next rival. “I played against him in the finals here in 2008 and he likes this court and these conditions — it is going to be a tough match.”