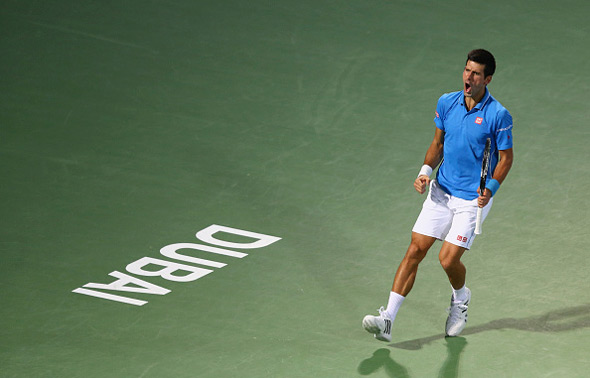 Nole is through to his 72nd career final!

Novak raced through the opening set in just 23 minutes with three breaks of serve.

The second set was more competitive. Djokovic and Berdych traded breaks twice. The world no.1 was serving to stay in the set at 5-6, but couldn’t hold as the two-time runner-up capitalised on his second set point opportunity in the 12th game to level the match.

Nole made a crucial break in the fifth game of the deciding third set, and went on to seal his 13th match win of the season and 18th victory in 20 matches against Berdych.

“Even after the first set that went as perfectly as possible and when I was a break up in the second, I knew that the match was not over,” said Djokovic. “I just wanted to stay on that level, but it was hard. I started making some unforced errors, backed up a little bit, less first serves in. Then he stepped in. From that moment on it was an even match, a lot of unforced errors from my side. I just wasn’t feeling the ball great in the third set, but somehow managed to hang in there.”

Novak will attempt to clinch his 50th tour-level title and his second of the year, when he takes on second seed and six-time former titlist Roger Federer on Saturday. The Swiss defeated young Borna Coric in straight sets earlier in the day.

Looking ahead to his 37th clash with Federer (17-19), Novak said: “When you play Roger, it’s always a great challenge. If you want to win you have to play your best tennis, especially against Roger in the final of any event, but here particularly. Because I feel like this is the kind of a surface and conditions that suit his game the best.”

Djokovic is a four-time winner in Dubai, lifting the trophy in 2009-11 and 2013. Last year he lost to the eventual champion Federer in the semi-finals.