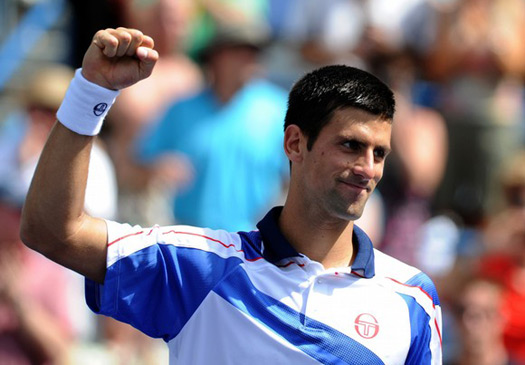 The stage was set for the world no.2 rankings battle between Novak Djokovic and Roger Federer in the BNP Paribas Open semi-finals on Saturday.

Third seeded Djokovic reached his third final of the season with a fantastic 6-3, 3-6, 6-2 victory over the Swiss in 2 hours and 6 minutes and will retake the no.2 position on Monday, March 21!

The Serbian extended his unbeaten run to 19 straight matches, including a 17-0 record in 2011.

This was Nole’s third consecutive win over the 16-time Grand Slam champion. He defeated Federer in both their meetings this year en route to the Australian Open and Dubai titles.

The 2008 Indian Wells champion made a break in the fifth game of the first set. He faced two break points in the very next game, but saved them both with great serving. The best Serbian tennis player sealed the game with a fantastic volley for 4-2 lead. Federer was serving to stay in the set when Nole brought up two set points at 15-40. The Swiss saved the first but hit wide on the second and Djokovic took the set 6-3 in 43 minutes.

Novak lost his momentum in the second set. He was broken twice, in the third and ninth games, and Federer won it 6-3.

The 23-year-old Belgrade native broke Federer’s serve already in the opening game of the decisive third set and then saved two break point opportunities before holding for 2-0. The Swiss broke back in the fourth game to equalise the result, but Djokovic found his rhythm again, put the pressure on Federer and broke his serve two more times, in the fifth and seventh games for 5-2 lead. Nole faced a break point in the eighth game but held and closed the set and match 6-2.

“That was the biggest test of the tournament for me today. Any time I play Roger, it’s a big challenge. He’s a great champion, especially in the later stages of a tournament when he plays his best tennis. I played fantastic in the first set and then lost that break at the start of the second and got him back into the game. I was really fortunate to get the crucial break at 2-2 in the last set.”

The new world no.2 will play against top seed Rafael Nadal in attempt to win the third trophy in 2011, and second at the ATP World Tour Masters 1000 event in Indian Wells. The world no.1 defeated Argentine Juan Martin Del Potro 6-4, 6-4 in the first semi-finals.

“I have played Nadal many times, and many times in the late stages of the tournaments, especially in the semis and finals of the major events. I know how it feels like to be in the big stand or how it feels like to play him, so I will be prepared. I want this trophy as much as he wants it, so we’ll both step into the court tomorrow wanting that win.”

Djokovic and Nadal have played 23 matches, the Spaniard leads 16-7.

The BNP Paribas final match is scheduled on Sunday at 21.00 CET.