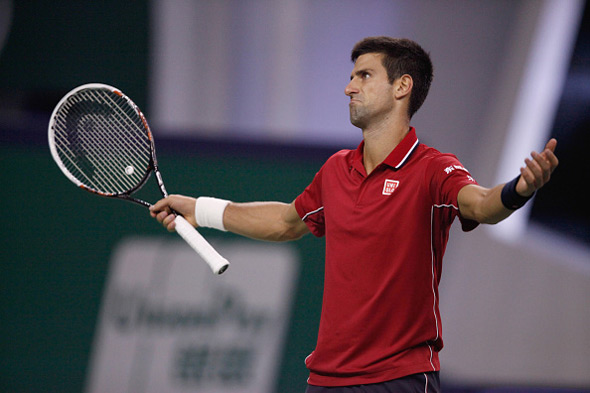 World no.1 and two-time Shanghai Rolex Masters defending champion Novak Djokovic suffered semi-final exit at the ATP Masters 1000 event on Saturday, after falling to no.3 seed Roger Federer 4-6, 4-6 in 1 hour and 35 minutes.

The pair met for the 36th time, with Federer now leading their FedEx ATP Head2Head series 19-17. Roger will face world no.29 Gilles Simon in Sunday’s final. The Frenchman beat Feliciano Lopez in straight sets earlier in the day.

Djokovic had come into his semi-final match riding a 28-match winning streak in China, but could not figure out a way to get past Federer. He was broken in the fifth game of the first set. The Swiss went on to win it 6-4.

Roger broke again in the opening game of the second set and maintained the lead. Novak saved two match points on his serve before Federer served out the match.

“I think I did not play too bad,” said Djokovic. “It’s just that he played everything he wanted to play. He played an amazing match.”

Novak was looking to reach his 30th ATP Masters 1000 final and his 69th overall. The 27-year-old Belgrade native was also chasing his third Shanghai Rolex Masters title after racing to victory in 2012 and 2013.