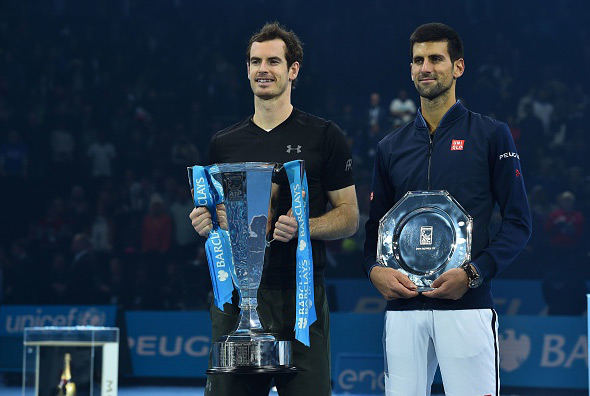 With the year-end no.1 ranking on the line, Sunday’s final between Novak and Andy brought the 2016 tennis season to a dramatic end.

It was an extraordinary physical and mental performance from the Brit in such a big match under pressure and expectation in front of a packed O2 Arena crowd.

Games went with serve until the eighth game when Murray made a break. He closed the first set and continued the momentum into the second, breaking Novak in the first and fifth games. Djokovic broke back once, but could not do more, as Andy continued to be the more solid player. The Dunblane native served it out on a third championship point.

With a 65-9 W/L record, two Grand Slam titles won, four Masters crowns and one ATP 250 trophy, Novak completed the 2016 season and finished year as no.2 for the second time in his career.

One of the season highlights was winning his first French Open crown in June when he completed the career Grand Slam and became just the eighth man to accomplish the feat.

“It has been a fantastic year with some great highlights, especially in the first six months. Andy is definitely number one in the world. He deserved to win. He is the best player,“ said Novak. “In the decisive moments I wasn’t able to come back. I played better late in the match but it wasn’t enough.“

The Serbian tennis star was attempting to finish no.1 for the third straight season and fifth time in six years. He was also trying to capture his fifth straight WTFs title and sixth overall, which would tie Roger Federer. Novak, Ivan Lendl and Pete Sampras have won five titles.

Murray becomes the 17th player in the history of the ATP Rankings to finish No.1.