Novak: I don’t know why… 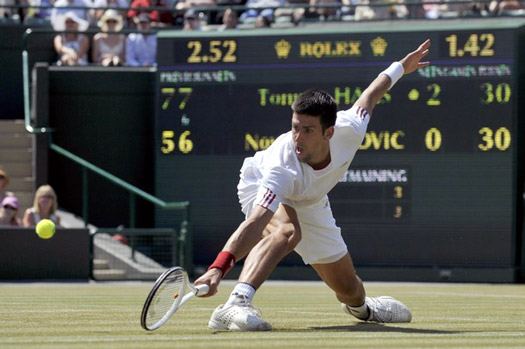 After his quarterfinal match at Wimbledon, the best Serbian tennis player made a constatation at the press conference, that he wasn’t playing at his best on the crucial points and that his opponent deserved to win.

He couldn’t explain why it happened.

‘I don’t know. I just somehow couldn’t relax in those moments, especially 5 All in the first two sets. You know, I was playing very, very defensively and making some unforced errors that I, you know, didn’t do throughout the match.’

World number four wasn’t returning well like he did against Mardy Fish in the third round.

‘He was serving really well. I didn’t return well, and that’s the bottom line. I think I was returning really bad. You know, return is one of my I mean, I think I can say one of my strength strokes in the game. But today was a real disaster.’

Novak went three steps further than last year by reaching the quarterfinals. He was not far from reaching the semifinals, but the glory went to experienced Haas whose career could have been better if he hadn’t had problems with injuries.

‘Tommy used his chances, he played better than me. He’s very aggressive player. I think he has a good serve, good volley. He has good chances even in the next match against Federer if he serves well. He just needs to keep his consistency . I think he’s a perfect player for the grass surface.’

Serbian no.1 raquet is not happy with his season so far, especially comparing it to the previous two.

‘I practice hard and work to progress. I think the problem at the moment is in my head. I was playing too defensively on crucial points.’