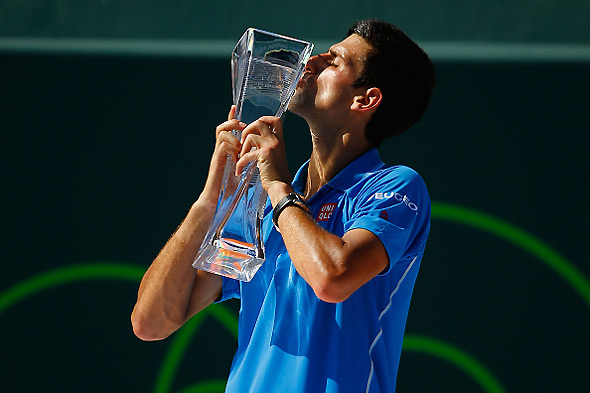 Nole made tennis history on Sunday, becoming the only man to claim the Indian Wells/Miami title double for a third time!

The match that lasted two hours and 46 minutes was played in hot and humid conditions.

Novak fought back from a break down twice, before sealing the opening set in a tie-breaker.

Games went with serve in the second set until the 10th game, when Andy capitalised on his chance to draw level at one set apiece.

The top seed quickly regained control of the contest. He sealed his 25th win of the season with a love set, breaking the Dunblane native three times in a decider.

“I want to thank my team for hanging in there through good and bad times,” Novak said. “This is one of the best tournaments on the calendar with lots of options both on and off court and I hope it continues for many years to come.”

Djokovic will tie Nadal’s total of 141 weeks at the top of the ATP Rankings on Monday.

After a week off, Nole switches his focus to the clay court season. He will next play at the Monte-Carlo Rolex Masters (April 12-19), where he was triumphant in 2013. Last year, he fell in semi-finals to Roger Federer (5-7 2-6).