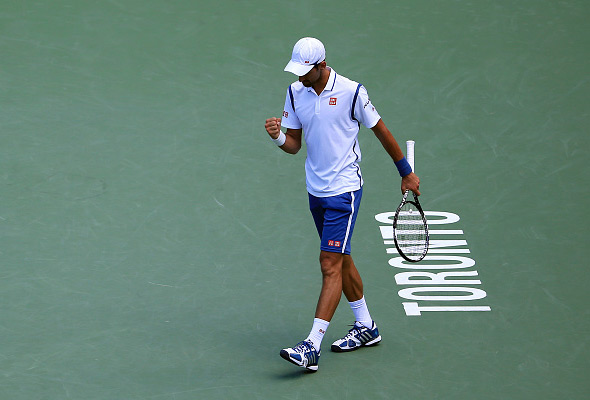 Three-time former champion Novak Djokovic beat ATP no.129 Radek Stepanek 6-2, 6-4 in 1 hour and 28 minutes on Thursday evening to advance into the quarter-finals of the Rogers Cup.

Novak broke twice in the opening set, in the fourth and eighth games. He surrendered serve in the first game of the second set, but recovered his composure and responded with a double break to seal his 12th win from 13 meetings with the 37-year-old Czech.

“I love playing with Radek, he’s one of the best friends on tour and it’s amazing what he does at his age. He qualified here, plays doubles quarters tomorrow. He is so experienced, he knows how to play in big occasions, he loves it. He’s so entertaining. It was so much fun,” Novak said.

Next up for Djokovic is Stepanek’s countryman, no.5 seed Tomas Berdych, who eliminated American qualifier Ryan Harrison in three sets (6-4, 6-7 (2), 6-4).

Looking ahead to the quarter-final challenge, he said: “I got to focus on recovery now and analyze some things from today’s match. Things that I’ve done right, things that I could have done better… It is necessary to step it up tomorrow.”