Novak moves into third round at Wimbledon 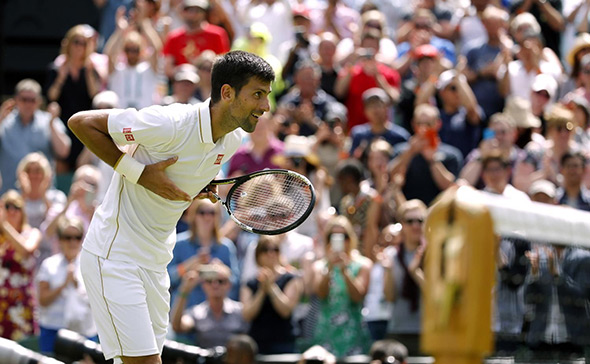 World no.1 and defending champion Novak Djokovic converted three of his seven break point chances against Frenchman Adrian Mannarino in the second round of Wimbledon on Wednesday to advance 6-4, 6-3, 7-6 (5).

With the Centre Court roof closed on a rainy day at the Championships, Novak progressed in two hours and four minutes.

“Fortunately I was scheduled on Centre Court, that helps on days like this. When the roof is closed the atmosphere gets even more special. It was fun,” Nole said.

Novak broke Mannarino once in the first and second sets, and went a break up in the third. He dropped serve for the first time in the match as he served for the victory at 5-4, but managed to prevail in a tie-break 7-5, capturing his 30th straight Grand Slam win.

“I do have a lot of expectations for myself but I am grateful that I am able to play at a high level so consistently. Thirty grand slam wins in a row is a stat I am proud of. I will continue playing with lots of passion and try to be dedicated and see how it goes,” the top-seeded Serbian star added.

Djokovic, the three-time champion at the All England Club, is chasing his 13th Major title.