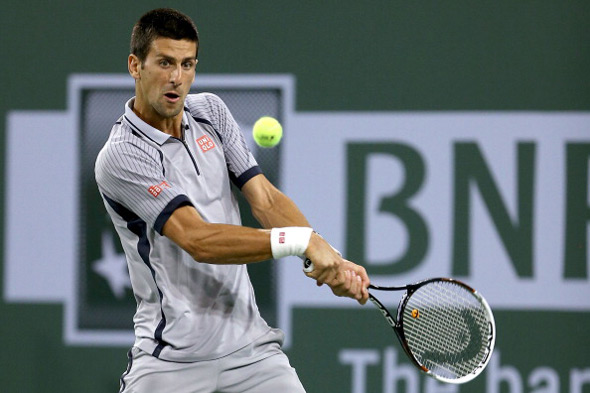 World no.1 Novak Djokovic advanced to the quarter-finals of the BNP Paribas Open on early Thursday morning at the Indian Wells Tennis Garden, dismissing American Sam Querrey 6-0, 7-6 (6) in one hour and 27 minutes.

Match started about 30 minutes after midnight local time. The two-time former titlist raced through the opening set with a triple break in just 22 minutes.

The players traded breaks of serve in the second set before Nole sealed the victory in a tie-breaker 8-6, converting his third match point.

“I’ve had this situations before when I waited for a long time, especially in Toronto last year… I try to stay composed, stay focused and try to combine the rest and preparations for the match. I came out sharp and played a great tennis. That’s what matters,” the top-seeded Serbian said. “At 3-2, I made a few unforced errors, he started playing better, lowered the percentage of unforced errors and came back. But I felt throughout the whole match that I had a control. I was moving really well, I’m very happy with the performance.”

The 25-year-old Belgrade native won 78 per cent of points on first serve and capitalised on four of his 11 break points.

Querrey was the last man to taste victory against the Serbian star in the second round of the Paris Masters last October. Since then, Novak has remained unbeaten in 21 matches (16-0 record in 2013).

Djokovic will face eighth-seeded Jo-Wilfried Tsonga in the quarter-finals on Friday.

It will be their 15th career encounter, Novak won all of their five meetings in 2012 (9-5 overall record).

“Jo is a great player. I’m sure he wants to win as much as I do. We played on slow courts a few times, last one was at Roland Garros, he had match points there. He can play well on any surface. It’s going to be a tough one.”

Quarter-final match-ups at the first ATP World Tour Masters 1000 event of the season: