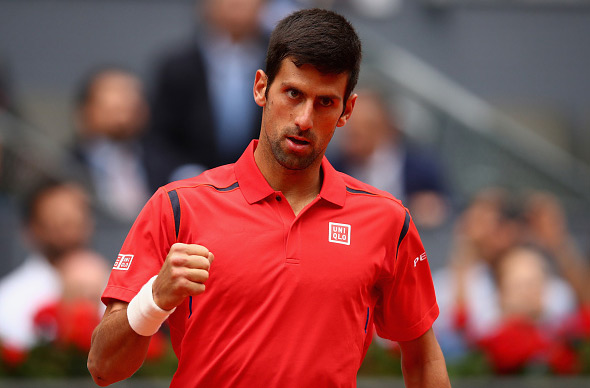 Kei had Novak in trouble in the opening game, but the Serbian kept his cool to save three break points. Undeterred, the Japanese continued to go toe-to-toe with Djokovic and was particularly brave at the baseline, winning 13 baseline points in the first four games. But Novak had his first sniff of a chance in game eight and, after failing with his first break point, a stunning cross-court hooked forehand brought up another and Nishikori went wide to lose serve.

Novak served out the opener and, with his tail up, had two break points in game one of set two, only for Nishikori to fight back for a big hold. There was no let-up in Nishikori’s tenacious approach and Djokovic escaped from a spot of bother at 0-30 down in game four. But once again Novak pounced when an opportunity presented itself, breaking for a 3-2 lead with a double backhand when Nishikori was chasing shadows. Nishikori still refused to wilt and he saved four match points before breaking back in a mammoth game 10, marking the first time Djokovic had dropped serve this week. The second set headed for a tie-break, though, and Novak moved ahead before celebrating the win when Nishikori put a backhand into the net.

“I think Kei has started exceptionally well so he obviously knows what his game plan is and what he wanted to do, and he started executing very efficiently from the very first point. I knew it was going to be a tough match. Obviously he was feeling the ball very well, trying to be aggressive on every shorter ball, hitting through, and trying to finish off the points. In tie-break I think I played very solid under the circumstances, and knowing that I missed four match points I was very solid after that. I think mentally it’s good to go through these particular situations for the confidence. I’m just proud to overcome this kind of challenge. Kei did play well. No doubt about that. It was a close match,” said Novak.

Novak will be playing in his fifth ATP World Tour level final this season, and his 90th overall (63-26 record).