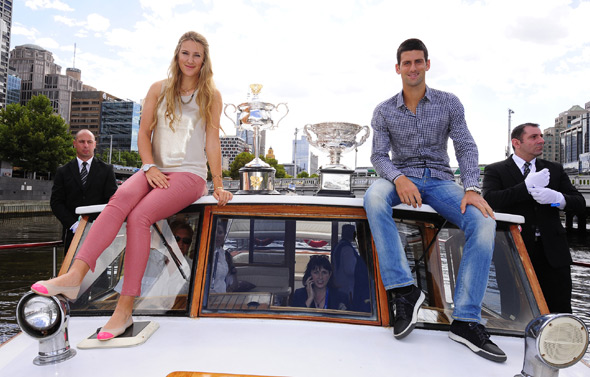 Defending champion Novak Djokovic will be the top-seeded player for the Australian Open (January 14-27).

He is followed by Roger Federer, Andy Murray and David Ferrer. Last year’s runner-up Rafael Nadal has withdrawn due to stomach virus.

The 2013 Australian Open draw has been revealed on Friday morning in Melbourne.

The first Grand Slam tournament of the season begins on Monday, January 14, at Melbourne Park. 128 players will be fighting during two weeks for the championship trophy and 2000 ATP points.

Novak will start his bid for a sixth Grand Slam title against world no.58 Paul-Henri Mathieu, on Monday about 14.00 local time (04.00 CET). He has a 4-1 H2H record against the Frenchman.

In the second round Djokovic will play the winner of the match between Ryan Harrison (USA) and Santiago Giraldo (COL).

The earliest seed he could meet is no.31 Czech Radek Stepanek, in round three.

Second seed Roger Federer (SUI) is in the bottom half of the draw, as well as Andy Murray (GBR, 3), Juan Martin Del Potro (ARG, 6), Jo-Wilfried Tsonga (FRA, 7), Richard Gasquet (FRA, 9)… and Nole can’t meet them before the finals.