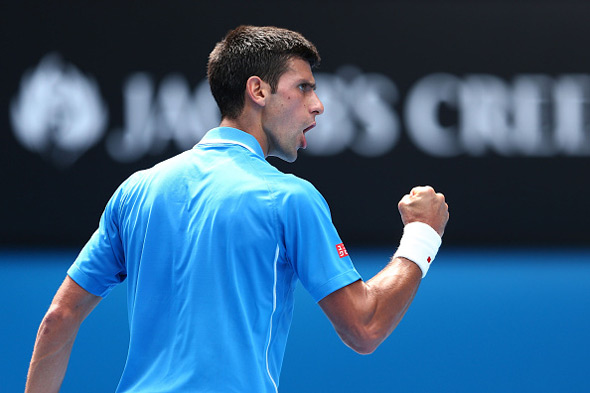 World no.1 Novak Djokovic started his quest to become only the second man in Australian Open history to win five titles (Roy Emerson won his 6th crown in 1967).

The top seed and a winner of seven Major trophies beat qualifier from Slovenia Aljaz Bedene 6-3, 6-2, 6-4 in the afternoon session on Rod Laver Arena on Tuesday.

Novak broke four times from eight opportunities for victory in one hour and 49 minutes.

Djokovic faced two break points in the fifth game of the first set, but held and went on to break Bedene in the eighth game and serve it out 6-3 after 36 minutes of play.

The 27-year-old Serb kept the momentum going in the second set. He broke twice for 6-2.

A break in the fifth game of the third set was enough for Nole to seal the win and reach the second round in Melbourne.

“He did surprise me,” said Djokovic. “I had a difficult time reading his serve. The courts are a bit faster than in the past two years. So if you have a big serve, know how to use it, it’s a big advantage on these courts. He’s a good player. He reached the finals in Chennai. Qualified again here. He felt confident. He had nothing to lose. On the other hand, I managed to stay tough, overcome some kind of challenges I faced at the beginning of the match. I played much more comfortably in the rest of the match. I think I did well in terms of responding to the slow start today, feeling a little bit rusty on the court. So hopefully the next one will be even better.”

Novak will next face world no.88 Andrey Kuznetsov of Russia who beat Spaniard Albert Ramos-Vinolas in four sets. It will be their first career meeting.