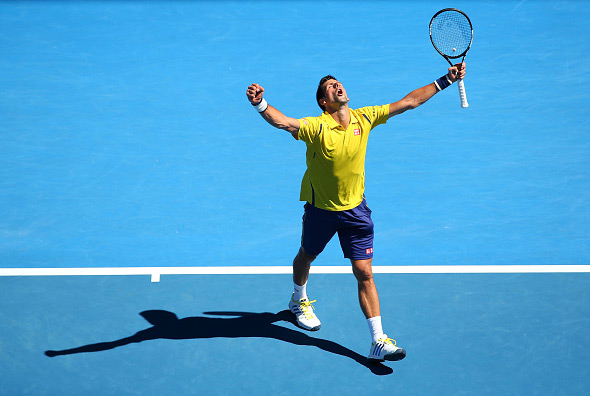 The world no.1 improved to 54-6 at Melbourne Park, advancing to the last eight for the ninth straight year in four hours and 32 minutes.

Novak extended his ATP Head2Head advantage over Simon to 10-1, but it took a great deal of time and effort. The top-seeded Serb converted just six of his 25 break point chances and committed 100 unforced errors.

Players had traded break once in the opening set before Novak broke again in the eighth game and took it 6-3 in 58 minutes.

In dropping the second set, Djokovic failed to convert 11 break point opportunities to Simon’s none, before losing a tiebreaker, in which he won just a single point.

Nole raced to an early lead in the third set, but Simon struck back in the fifth game, breaking to love. The battle continued, but it was the world no.1 who stepped up his game when he needed to, winning it 6-4.

Simon prevailed in the fourth set breaking Djokovic in the ninth game and took the match into a deciding fifth set.

Nole finally made the breakthrough. He stormed to a 5-1 lead with a double break. The Frenchman broke back once, but Novak closed it out at fourth attempt.

“I was obviously pleased to win the match,” said Novak. “But in terms of the performance itself, I haven’t done well at all. You can expect unforced errors when you’re playing Gilles who is one of the best counter-punchers on the tour at the moment and he’s been around for many years. I honestly didn’t expect to make this many unforced errors. In terms of a level I’ve played, it’s a match to forget for me.“

“I have tremendous respect for Connors’ achievements and what he’s done for the sport. He drew a lot of people to watch tennis, bringing a lot of energy on the court, a lot of charisma, just a lot of quality overall. To be mentioned alongside such a legend is a privilege. The fact I played so many QFs in a row definitely pleases me.”