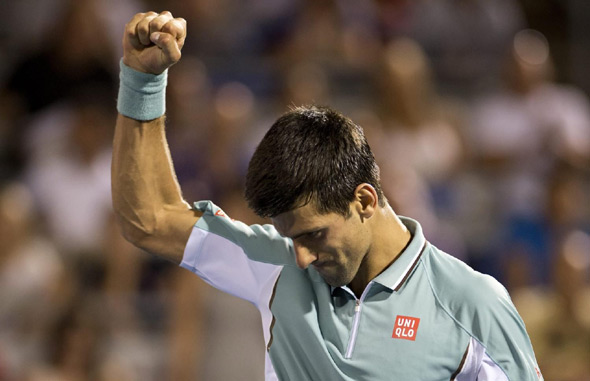 World no.1 Novak Djokovic made a winning return to Canada, beating Gael Monfils 6-2, 6-7 (4), 7-6 (2) in the second round action on Wednesday at the Rogers Cup in Toronto.

The top seed broke Monfils in the sixth and eighth games to take the opening set.

Games went with serve in the second set. The Frenchman won a tie-breaker 7-4 to level.

Novak came from a break down in the deciding third set to force another tie-breaker. He sealed it 7-2, improving his perfect H2H record with Monfils to 10-0.

“In a way it was fun and entertaining to be part of this match,” said Djokovic. “I enjoyed it. I’m trying to take the positives from this long match. I stayed over two-and-a-half hours on the court; I haven’t played an official hard court match since Miami final. It helps to play a bit more, to feel the court and the conditions.”

It was Novak’s first match since triumphing at Wimbledon (d. Federer) one month ago.

Novak goes on to face no.13 seed Jo-Wilfried Tsonga on Thursday (13-5 record).

The Frenchman eliminated his compatriot Jeremy Chardy in straight sets.

“Tsonga has a similar, power game like Gael. I’m not feeling tired, or exhausted, I haven’t played a tournament for four weeks. I look forward to competing more.”

The Serbian star played his doubles second round match with Stanislas Wawrinka later in the day. They fell to no.3 seeds, Nenad Zimonjic and Daniel Nestor, 4-6, 4-6 in 50 minutes.