Novak powers to third round in Paris 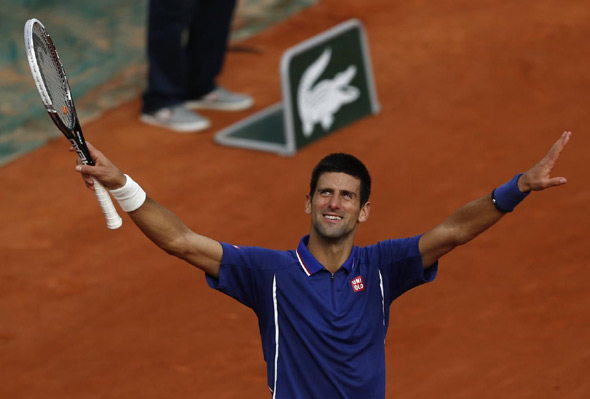 2013 Roland Garros top seed Novak Djokovic advanced into the third round in Paris when he ousted world no.83 Guido Pella 6-2, 6-0, 6-2 in just 86 minutes on Court Philippe Chatrier.

Nole put in an impressive performance, wasting little time on court on a rainy Thursday. He raced to a 6-2, 3-0 lead over the Argentine before rain interrupted play. Players were back on court, and Djokovic won nine of 11 games to seal his 30th win of the season.

“It’s like deja vu from two days ago, coming in and out and warming up five times, but it is the way it is,” Novak said. “I’m just glad that I finished the match today.”

Novak next faces no.26 seed Grigor Dimitrov of Bulgaria.

“I think he’s got more confident as he was getting big wins in the past few months, he’s a tough player to beat now, definitely,” said Djokovic. “Even though his style of play is maybe better on hard court or faster surfaces, he’s showing that he can play equally well on clay. He pushed Nadal to tough three sets in Monaco. He beat me in Madrid. It’s going to be a tough one for both of us, definitely. I need to be on top of my game. It’s going to be very physical and all the hard work I put into preparing for this tournament, hopefully will play into my advantage and will pay off on the court.”