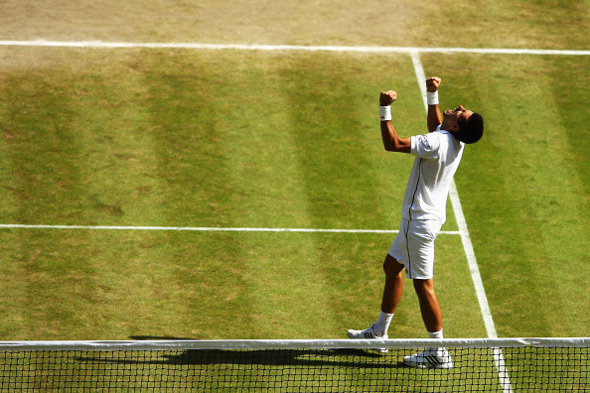 Novak is through to his third Wimbledon final!

Dimitrov made four errors in the fifth game of the opening set to hand Novak a break. The Belgrade native was a perfect 19/19 on serve at that point. He cruised through his games and closed the set 6-4 in 26 minutes.

He broke first in the second set and held for 3-1 lead, but from there, Dimitrov raised the level of his game, and Djokovic started making more errors, which resulted in five straight games for the Bulgarian who took the set 6-3 to level at one-set-all.

Nole fended off a break point in the seventh game of the third set, which showed to be crucial for his confidence in the rest of the match. He went on to win a tie-breaker 7-2.

Three double faults and a forehand error from Dimitrov handed Djokovic an early break in the fourth set. However, Grigor broke back immediately for 2-2. The set went into a tie-breaker. Dimitrov took a 6-3 lead, but Novak remained composed. He saved all three set points and eventually sealed the set and match 9-7 with a cross-court forehand winner.

“I was playing in the semi-final against a future star. He is already a top player after beating Murray and he deserves respect for that. For his first semi he was really fighting and it was tough,“ Novak said. “I am just pleased to go through. It is a good win for me I am glad to be part of a great match.”

The top seed won 73% of points on first delivery and was 27/47 when approaching the net.

If Nole captures his 7th Major title, he would return to no.1 in the ATP Rankings on Monday.

“Considering I have lost the last couple of Grand Slam finals I am really looking forward to it,“ Novak said. “It’s a big match. Whoever I will play in the final, I will have to be at my best in the biggest match in sport.”