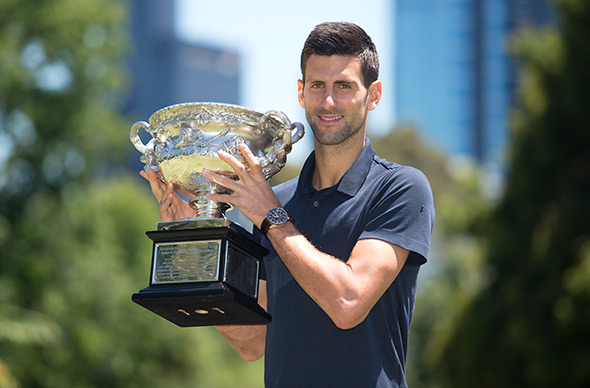 Novak Djokovic wrote a new chapter in the history books in Melbourne on Sunday!

The world no.1 re-established himself as the king of Melbourne when he claimed a sixth Australian Open title in an astonishing final.

The Serbian star is now the most successful player in Melbourne alongside the legendary Roy Emerson, with six crowns Down Under. He maintained his perfect record in six finals.

Andy’s run of misfortune in finals at Melbourne Park continues, with his fourth defeat to Novak in deciders. He also lost to Roger Federer in 2009.

Tonight’s match-up was the 31st between the pair and their sixth Grand Slam final (4-2), with Novak now enjoying a 22-9 win-loss against his rival.

In a rematch of the 2015 Australian Open final, Nole produced another master class in tennis. The top seed proved superior once again. He brought his A-game against the Scot and raced to a 5-0 lead in just 19 minutes, then closed the first set two games later.

The 80-minute second set was a fierce battle. Both players exchanged service breaks to 4-4. It was the Belgrade native who made a crucial one in the 11th game, and sealed it 7-5.

Djokovic opened up a 2-0 lead in the third set, but Murray fought back in the sixth game to level at 3-all. Novak dominated the tie-breaker, and hit his seventh ace to complete his 2016 Aussie Open campaign in style.

“I want to pay respect to Andy for another great tournament,” Novak said during the ceremony. “He’s a great champion, great friend and a great professional who I’m sure will have many more chances to win this trophy.  A big ‘Thank you’ to my team. Each time we play a Grand Slam it’s a very unique feeling, set of circumstances where all of us have to breathe as one. We live each day, each hour with a purpose and a goal. We’ve been here three weeks hoping we could get to this trophy.”

“Congrats Novak. Six Australian Opens is an incredible feat. The last year has been incredible. Good job,” Murray said in praise of Novak.

With 11 Grand Slam titles under his belt, Nole is now tied with Rod Laver and Bjorn Borg. Only Roy Emerson (12), Pete Sampras and Rafael Nadal (14) and Roger Federer (17) are ahead of the Serb in the all-time major singles championship list.

“Every Grand Slam title is very significant in its own way. Here, because of the fact that I managed to make history tonight and equal Roy Emerson’s six Australian Open titles. Very honored to be mentioned alongside legends of our sport Bjorn Borg and Rod Laver, to win as many Grand Slams as they did,“ said Djokovic.

Next tournament for Novak will be the Dubai Duty Free Tennis Championships from February 22-27. The four-time former titlist finished runner-up to Federer last year.