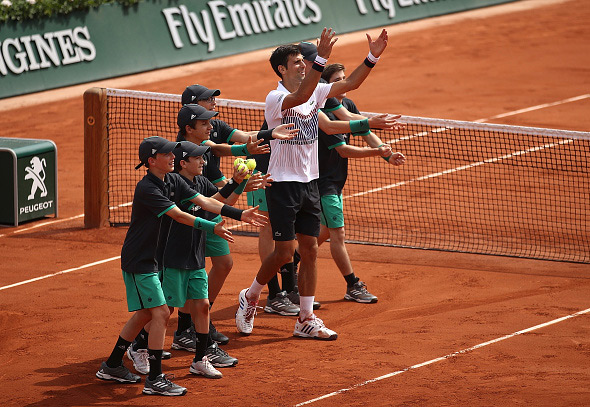 In an enjoyable evening match on Philippe-Chatrier Court, no.2 seed Novak Djokovic proved too strong for 19th seed Albert Ramos-Vinolas.

Novak converted seven of 10 break point chances, having saved five of eight break points he faced. The defending champion is into the quarter-finals on the Parisian clay for the eighth straight year.

Djokovic came back twice from a break deficit in the opening set, before prevailing in a tie-breaker 7-5.

Riding the momentum, the 30-year-old Belgrade native stormed to a 4-0 lead in the second set, and broke the Spaniard once again in the seventh game for two sets to love advantage.

After saving a break point in the first game of the third set, Novak converted his chance for a 2-0 lead. His opponent broke back straight away and held to level the score. The 12-time Grand Slam titlist made another break in the sixth game and served it out three games later, improving his ATP H2H record against Ramos-Vinolas to 4-0.

“I just didn’t start out of the blocks the way I wanted,” said Djokovic. “He started very solid, not making errors and just spinning the ball well, getting a lot of balls back. There were a lot of breaks and rebreaks in the first set. But it was very close. It could have gone either way and I’m just glad that I managed to win that tie-break, because after that I started playing with more freedom and more confidence. The second and third went really well. I thought especially in the second I did things very well from the back of the court. I mixed it up and didn’t give him any comfort zone on the court. I always made him guess, which was one of the keys.”

Awaiting Novak in the last 8 will be sixth seed Dominic Thiem (5-0 H2H record) who lost only five games in a straight sets win over Horacio Zeballos.