Nole serves up masterclass to capture second US Open title! 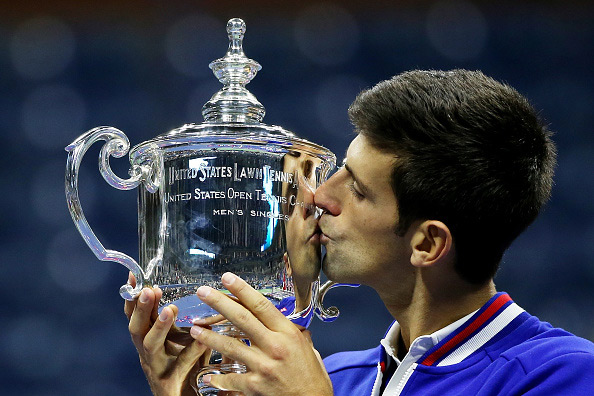 Impeccable Nole is US Open 2015 champion!

After a three-hour rain delay, Novak and Roger took to the court under the lights on Arthur Ashe Stadium. Nole was the one who took control early in the match. He was up a break and serving when a slip and fall seemed to knock him off his game. Federer won the next two games to move ahead. The Serb recovered and broke once more to win the set 6-4.

Federer’s serve came back in the second set. He did not allow Novak a single break point chance, taking it 7-5, to level the match at one set apiece.

In the third and fourth sets Djokovic proved to be too good. Despite a heavily pro-Federer crowd, the 28-year-old Belgrade native remained focused and outplayed the Swiss in the biggest points of the match. The pair squared off for the 42nd time. They are tied 21-21.

“I have to share my admiration for Roger and what he is doing. I have tremendous respect for him and the challenge he is presenting. Knowing you are playing the best player ever in history of the game, I knew I needed to play my best in order to win this trophy and it’s a quite incredible evening for me,” Novak said. “It’s been an incredible season, next to 2011 the best of my life. But I’m enjoying this year more than I did any previous one because I’m a husband and a father and that makes it sweeter. I love this sport and all these results and achievements are incentive for me to keep on going. I am going to try to enjoy this victory as much as I can.”

The clash of the titans lasted three hours and 20 minutes. Nole, who also won in NY in 2011, broke six times from 13 opportunities and saved 19 of 23 break points he faced.

The victory completes one of the greatest seasons in men’s tennis history for Nole, who made all four major finals, losing just one – the French Open to Stan Wawrinka.

Djokovic is now tied with Bill Tilden with 10 Grand Slam titles, one behind Borg and Laver.