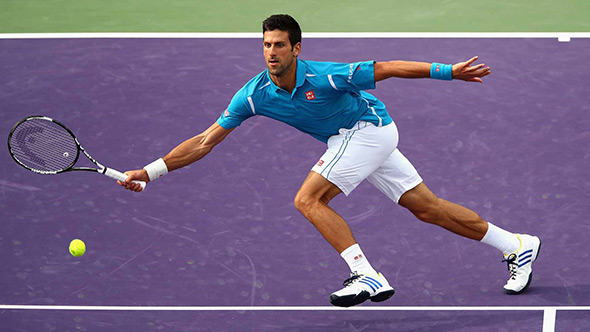 Top seed Novak Djokovic beat Gilles Muller for the third time in as many career meetings, progressing to round three of the Rogers Cup presented by National Bank on Wednesday, with a 7-5, 7-6 (3) victory in one hour and 43 minutes.

Novak, playing his first match after Wimbledon, won 77 per cent of points on his first serve.

Games went with serve until 5-5 in the opening set, when Djokovic converted on his first break point chance and then served out the set in the next game.

Novak and Muller traded breaks twice in the second set. The Belgrade native earned a chance to serve out the match at 5-4, but the former world no.1 junior player responded with an immediate break back. He took a 3-1 lead in the tie-break, but Nole won the final six points to take the match.

“Gilles is very difficult player to play against in quick conditions. Takes away the time of the opponent. He serves and volleys second serve a lot, as well, one of the rare guys that does that,” said Novak. “He likes to play quick, and I think the warm day like today played a lot in his favor. I managed start of the match well and get set and a break up, and then I dropped my serve twice in the second set. Those are the only, let’s say, downsides to the match today. Other than that I’m quite pleased with the way I held my nerves and was focused and just overall performance was very pleasing considering it was the first hard court match for a long time.”