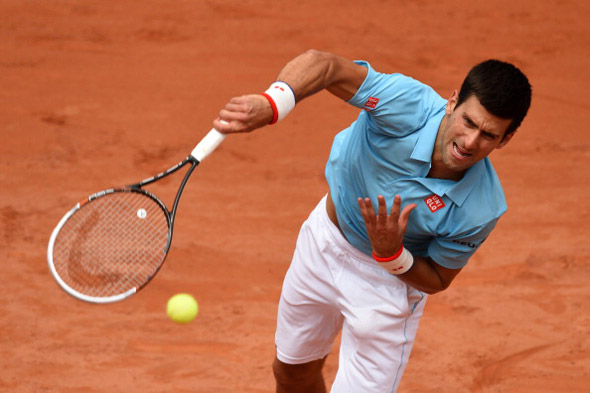 Nole is through to the last eight at Roland Garros as he dismissed no.13 seed Jo-Wilfried Tsonga 6-1, 6-4, 6-1 on Court Philippe Chatrier on Sunday.

The second-seeded Serb claimed victory in just 89 minutes. It was his 12th win in 17 ATP Head2Head meetings with the Frenchman.

Novak dominated the match from the word go, showing great power, determination and extraordinary game. He broke seven times from nine opportunities and saved one of two break points he faced.

The match was in complete contrast to their clash in Paris two years ago, which Djokovic won in five sets.

“The performance was great from the start till the end. I came with the exact level of intensity that I was looking for before the start of the match,” said Novak. “Two years ago was kind of a similar situation where I started very well, won the set 6-1 and I was 4-2 up and then he managed to come back. Then we had the tough match that ended up in five sets. I didn’t want the similar scenario.”

As he looks to reach the semi-finals at French Open for the sixth time, Novak will face Milos Raonic (CAN, 8). The 27-year-old Belgrade native leads their H2H 2-0.

Djokovic has a 28-3 match record on the season, highlighted by titles in Indian Wells, Miami and Monte-Carlo.